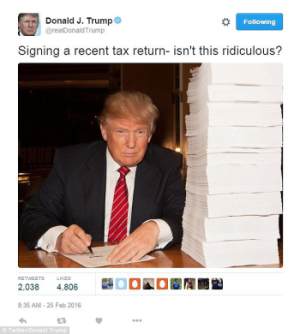 The years-old mystery of what’s in President Donald Trump’s tax returns will likely quickly unravel if Democrats win control of at least one chamber of Congress.

Democrats, especially in the House, are quietly planning on using an obscure law that will enable them to examine the president’s tax filings without his permission.

The nearly 100-year-old statute allows the chairmen of Congress’ tax committees to look at anyone’s returns, and Democrats say they intend to use that power to help answer a long list of questions about Trump’s finances. Many also want to use it to make public confidential information about Trump’s taxes that he’s steadfastly refused to release.

“Probably the approach would be to get all of it, review it and, depending on what that shows, release all or part of it,” said Rep. Lloyd Doggett, the No. 4 Democrat on the Ways and Means Committee.

That could bring a swift end to the long-running battle over Trump’s returns, while generating loads of fodder for what promises to be an array of investigations into the administration if Democrats win power.

Lawmakers are not doing much now to advertise their opportunity to seize Trump’s returns ahead of the midterm elections, in part because some believe it will only rile his supporters. ...

It would be highly unusual for Congress to release confidential tax information, though not unprecedented.

As part of their Obama-era investigations into whether the IRS discriminated against conservative groups seeking tax-exempt status, Republicans on both the Finance and Ways and Means committees agreed to release private tax information about the organizations. At the time, Democrats decried the move, though some now call it justification for unmasking Trump’s returns. ...

It would be highly unusual, and surely incense the president. Some predict it would precipitate a legal war with the administration while scuttling any chance Democrats have of working with Trump on issues where they agree, like increasing infrastructure spending. Democrats might be accused of using their access to private tax information as a political weapon. ...

The 1924 law stipulates the Treasury Department “shall” turn over “any return or return information” requested by the chairs of the tax committees or the head of Congress’s nonpartisan Joint Committee on Taxation for them to review privately.

The law was passed amid concerns about corruption and conflicts of interest in the executive branch, such as those posed by then-Treasury Secretary Andrew Mellon’s business interests.

“When this right was first developed, it was developed in an environment not dissimilar to now,” said George Yin, a former JCT chief who now teaches at the University of Virginia’s law school. ...

In 2014 and 2015, after extensive consultations with Congress’ legal, tax and ethics advisers, both tax committees voted to release protected information as part of their investigations into the IRS’s Tea Party-targeting scandal. Lawmakers didn’t release any individual person’s returns, but the information disclosed enjoyed the same legal protections. ...

“We’ve never forced presidents to release their returns by saying, ‘Do it or we’re going to do it for you.’ We’ve always relied upon them to do it voluntarily," said Joe Thorndike, director of the Tax History Project at the nonpartisan Tax Analysts. “We would be crossing a threshold.” What’s more, he said, there’s no reason why other elected officials might not become subject to the same standard, or perhaps even private businesses or individual taxpayers.

“It’s not limited to the president – they could release anybody’s tax return,” said Thorndike. “Where does it end?”

Win by any means necessary. What could possibly go wrong?

Scandals and socialism. It's quite a package.

During Election 2016, the Obama (D) administration controlled to a chilling extent the IRS, using it to go after their political opponents. If there was the slightest irregularity in Trump's tax returns, it would have leaked out. This is classic Democratic behavior, assuming (quite correctly) that a large slice of their voting bloc is as stupid as stumps, willing to believe even the most obvious of lies.

"In 2014 and 2015, after extensive consultations with Congress’ legal, tax and ethics advisers, both tax committees voted to release protected information as part of their investigations into the IRS’s Tea Party-targeting scandal. Lawmakers didn’t release any individual person’s returns, but the information disclosed enjoyed the same legal protections" If I remember rightly, they released info that the taxpayers in question wanted released, but the IRS didn't because it made the IRS look bad. If the committees release the President's tax returns to the public (or mine), would that be non-criminal?

Most likely what they'll find is that it's all perfectly legal. At which point they'll leak whatever they find politically expedient and make unverifiable claims about the rest. The only way that Trump will be able to counter that will be to release his tax returns, which is the object of the exercise. Despicable.

Just another attempt at a soft coup. More criminals using their crime syndicate to maintain control of the American plantation. Every dog has their day.

Disincentivizing voluntary compliance with the tax laws. That won't be a problem when they have the power they want, which includes the government's boot on our throats.

Given that the IRS is an Executive Branch Agency, isn't the most likely outcome that the President directs the Agency to ignore the request from Congress? And then we progress to a drawn-out legal fight?