Brunson Presents God And The IRS At UC-Irvine 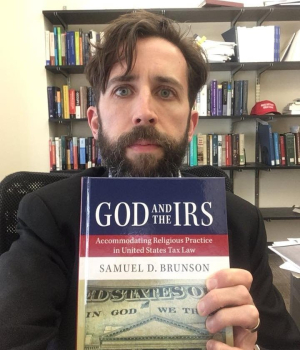 Seventy-five percent of Americans claim religious affiliation, which can impact their taxpaying responsibilities. In this illuminating book, Samuel D. Brunson describes the many problems and breakdowns that can occur when tax meets religion in the United States, and shows how the US government has too often responded to these issues in an unprincipled, ad hoc manner. God and the IRSoffers a better framework to understand tax and religion. It should be read by scholars of religion and the law, policymakers, and individuals interested in understanding the implications of taxation on their religious practices.

God and the IRS proceeds from the assumption that tax law is inherently interesting and that its attempts to accommodate religious practices are profoundly important. To see what a free society truly values, we must understand how it navigates the numerous tensions between private belief and public obligation. Whether he is talking about Muslim mortgages, Mormon missionaries, or Methodist parsonages, Samuel D. Brunson writes with patience, humor, and clarity. One need not be an attorney or a tax expert to profit from this book, just an engaged and intellectually curious citizen.
Michael Austin, Executive Vice President for Academic Affairs, University of Evansville, Indiana

When and how should the tax system accommodate religious practice? Samuel D. Brunson does a great job tackling this important but difficult topic, addressing some of the most common ways in which conflicts arise and offering a framework for deciding future cases. This book should appeal to anyone interested in tax law, religion, or both.
Adam Chodorow, Arizona State University

Drawing on a superb mastery of tax law and the historical nuances of many religious traditions, Samuel D. Brunson compellingly argues for a re-examination of American policies at the points where religion and taxation collide. His nuanced and learned proposal for reform should be studied by policy makers, political scientists, sociologists, legal scholars, historians of religion, and anyone concerned about the relationship between money, government, and religious practice in the American context.
Stephen C. Taysom, Cleveland State University