Classic Lesson From The Tax Court: When Hornung Won The 'Vette 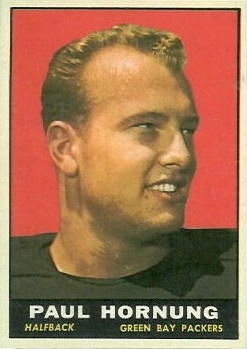 I'm back from vacation, but busy preparing for the start of classes, so I offer another Classic Lesson that I have been saving.  I hope you enjoy it.  I will return next week with a new Lesson based on a recent case.

I find tax more interesting than football.  But I know I am not like most people.  So I enjoy using the classic case of Hornung v. Commissioner, 47 T.C. 428 (1967), because it not only teaches students a bit about football history, it also helps them understand a really important tax concept: the doctrine of constructive receipt. As a bonus, it is also one of those fun cases where the taxpayer and the IRS take the opposite of their normal positions, with amusing consequences.

Paul Hornung was an outstanding football player in the 1960’s, winning a bunch of very well known awards: the Heisman Trophy, the NFL MVP award, and induction into both the professional and college football halls of fame.  Here's a Sports Illustrated tribute to him.

Hornung also won a Corvette on December 31, 1961, when his team (the Green Bay Packers) beat the New York Giants for the National Football League Championship. Remember, at that time the NFL was the main football league so this was, basically, the Super Bowl. The AFL was only just starting and it was several years before the first designated “Super Bowl” game occurred between the leagues.

Hornung was selected by Sport Magazine as the game’s most valuable player. That selection came with an award: a brand-spanking new 1962 Corvette. The award was announced in Green Bay at the conclusion of the game in the late afternoon of Sunday, December 31, 1961. The car was in Manhattan. Hornung picked up the car the next week at a lunch given in his honor by the magazine. He sold the car a few months later for just over $3,000.  He did not report any income from receiving the Corvette, either in 1961 or in 1962.  When the IRS audited his 1962 return, he claimed that if receipt of the Corvette was income, it was income in 1961, not 1962, under the doctrine of constructive receipt.  To see how that worked out for him, you will need to dive below the fold.

The significant exception to that rule is the constructive receipt doctrine. Here’s how Treas. Reg. 1.451-2 explains the doctrine: “Income although not actually reduced to a taxpayer's possession is constructively received by him in the taxable year during which it is credited to his account, set apart for him, or otherwise made available so that he may draw upon it at any time, or so that he could have drawn upon it during the taxable year if notice of intention to withdraw had been given. However, income is not constructively received if the taxpayer's control of its receipt is subject to substantial limitations or restrictions.”

This last sentence is somewhat ambiguous. It could be referring to a substantial legal limitation or restrictions. That is typically how the IRS reads it and no court disagrees. But it also could refer to the idea of substantial physical limitation, such as distance.   The IRS typically objects to that interpretation and Courts are split.  Compare Baxter v. Commissioner, 816 F.2d 493 (9th Cir. 1987)(taxpayer did not constructively receive a check made available to him on December 31st when the check was physically 40 miles away) with McEuen v. Commissioner, 196 F.2d 127, 129-130 (5th Cir.1952)(taxpayer constructively received a check made available to him on December 30th when the check was in Ohio and the taxpayer was in Florida).

Facts and Holding of the Case

When the IRS audited Hornung's 1962 returns, it dinged him in the NOD for failure to report the receipt of the Corvette award as gross income. The IRS also dinged him for failing to report income from (a) free use of a car dealership’s car in 1962 and (b) a mink stole the Green Bay Packer organization gave his mom, pursuant to a team policy to give a fur coat to any player’s wife, mother, or friend of a player in recognition of the team winning the Western Division earlier in 1961.

Hornung protested the NOD to Tax Court in 1966, drawing Judge Austin Hoyt.  Curiously, Judge Hoyt is not listed on the Wikipedia website as a former Tax Court Judge.  I'm not sure why that is.  Perhaps an ambitious reader will correct that oversight.

Hornung’s first argument was about timing. He invoked the doctrine of constructive receipt to argue that if the Corvette was income, it was income in 1961 and not 1962. Now, taxpayers normally try to put off income from an earlier year into a later year, and the IRS is usually the one saying that something received on December 31st is income in that year.  So it is a bit upside down to have a taxpayer arguing for application of constructive receipt and to have the IRS argue against it. But one quickly sees why Hornung was making this play: the year before the Court was 1962 and 1961 was a closed year, so if he could push the receipt of the car into 1961, then he would score a victory.

But the last sentence in the regulation blocked Hornung’s run at saying he constructively received the Corvette in 1961 at the conclusion of the championship football game. Recall that sentence says that “income is not constructively received if the taxpayer's control of its receipt is subject to substantial limitations or restrictions.” The Tax Court thought receipt of the Corvette was subject to substantial enough restrictions as to preclude application of the doctrine. First, he did not get title in 1961. Second, he was in no position to take any sort of control over the car in 1961.

Hornung’s second argument was that the Corvette was not even income, so it did not matter when he received it. It was, he argued, an excluded prize under the then-operative provisions of §74(b) (the opinion sets out the statute as it then read). Judge Hoyt employed some football imagery of his own in rejecting this argument. “In making this argument, petitioner shifts into a shotgun formation, contending that his accomplishments in the championship football game constitute educational, artistic, scientific, and civic achievements within the meaning of section 74(b). We believe that petitioner should be caught behind the line of scrimmage on this particular offensive maneuver.”

The first important lesson I draw from this case is that the constructive receipt doctrine is a timing rule. As the First Circuit long ago explained in Ross v. Commissioner, 169 F.2d 483, 491 (1st Cir. 1948): "The doctrine of constructive receipt was, no doubt conceived by the Treasury in order to prevent a taxpayer from choosing the year in which to return income merely by choosing the year in which to reduce it to possession. Thereby the Treasury may subject income to taxation when the only thing preventing its reduction to possession is the volition of the taxpayer.”

My students (and others) make a common error in thinking the constructive receipt doctrine is about whether a taxpayer has income.  For example, say I win a prize and the condition on the prize is that I must pick it up in 30 days or else I don't get it.  If I win the prize in June and do not pick it up within the 30 days, and so forfeit it, it does not constitute income even if not picking it up was my own volition. The income was never realized. Constructive receipt is not a doctrine that forces people to accept accretions to wealth that they do not want. However, if I win the prize in December and then simply put off picking it up until early January, why now I have realized the income, and the constructive receipt doctrine tells me when I got it.

A second lesson I teach from the case is about what constitutes a substantial limitation. It is not clear to me whether the substantial limitation here was a legal one or physical one. I like to focus students on what I think is the ambiguous language Judge Hoyt used to find the existence of substantial limitations. Go head, read the following explanation by Judge Hoyt carefully and see if you can tell precisely which limitation counted: “At the time the award was announced in Green Bay, the editor in chief of Sport had neither the title nor keys to the car, and nothing was given or presented to petitioner to evidence his ownership or right to possession of the car at that time. Moreover, since December 31, 1961, was a Sunday, it is doubtful whether the car could have been transferred to petitioner before Monday even with the cooperation of the editor in chief of Sport. The New York dealership at which the car was located was closed. The car had not been set aside for petitioner's use and delivery was not dependent solely upon the volition of petitioner. The doctrine of constructive receipt is therefore inapplicable...”

The legal limitation was the failure of Hornung to receive title to the car on December 31st. It was not, legally, his car yet. Notice that is the first reason Judge Hoyt gives. The physical limitation was in Judge Hoyt’s “moreover” sentence: the distance between Hornung and the actual car. Would either one be sufficient alone?  We don’t know. Some lessons are simply unfinished.  But I think this second lesson is a good one because students need to know how to argue ambiguities as much as they need to know the bright lines.

Coda: The first lesson is reinforced by how Judge Hoyt treated the mink stole that the Green Bay Packers gave Hornung’s mom in 1961. It was income to him, and in 1961. But the reason it was income to him was not because of the constructive receipt doctrine. It was because of the assignment of income doctrine first articulated by the Supreme Court in the classic tax case, Lucas v. Earl, 281 U.S. 111 (1930) where Justice Holmes famously said that the fruits (the mink stole) must be attributed to the tree on which they grew (Hornung’s labor). And it was income to him in 1961 because she actually received it (and wore it to the championship game) in 1961 so there was no question of timing.

A building is sold via eminent domain in December 19 and seller receives the proceeds in January 2018. When is the capital gain reported??