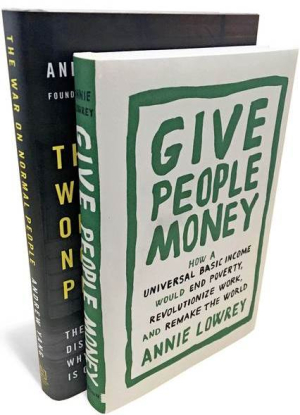 The concept of a universal basic income, or UBI, has become part of the moral armor of Silicon Valley moguls who want a socially conscious defense against the charge that technology is making humanity obsolete. The logic of UBI runs that if every adult received $12,000 annually in free, unfettered cash, then we would not need to worry about an ocean of underemployed men who numb their feelings of worthlessness with computer games and opioids. The folly of UBI is that it sees a cash payment as a substitute for purpose and accomplishment and that it enables joblessness when we should be encouraging employment and job-creating innovation.

Two new books examining UBI are better than their subject deserves. Annie Lowrey’s “Give People Money” advances the general progressive case for UBI as a new link in the safety net. Andrew Yang’s “The War on Normal People” is squarely targeted at the techno-dystopians who see UBI as a response to a jobless future in America.

Ms. Lowrey’s case is stronger. ... Distinguished intellectuals on the right, including Milton Friedman and Charles Murray, have advocated for simple cash transfers instead of various welfare programs, a move that would stop the government from micromanaging the lives of the poor. The problem with Friedman’s perspective, which Ms. Lowrey well recognizes, is that taxpayers are typically not interested in funding jaunts by food-stamp recipients to Las Vegas even if those trips really do bring more satisfaction than health care and fresh vegetables. In any case, Ms. Lowrey has little interest in “eliminating the country’s existing antipoverty programs and converting them to a UBI,” because she believes such a change “would likely result in an increase in poverty.” Instead, she wants to add cash transfers to the existing safety net, in order to reduce American poverty.

This is a tenable position, unlike the view advanced by tech moguls—and Mr. Yang—that UBI is a sensible response to mass joblessness. I share Mr. Yang’s worries about the future of work, but I remain convinced, even after reading both of these books, that UBI is the wrong answer to this challenge. We need policies that encourage job creation and working, not policies that pay people not to work. ...

There are many sensible ways to fight mass joblessness. We could reduce the regulations that stymie entrepreneurship. We could reform benefit programs, like disability insurance, that deter work. We could reduce the payroll tax for low-income workers and their employers, and we could even reward low-income workers with wage subsidies (a per-hour boost) paid for by taxpayers. A future in which two-thirds of America lives off UBI is a true horror. If we “give people money,” we should do it by subsidizing them to work.

Why is Prof. Glaeser, like almost all left of center academics, unwilling to even think about the role that millions of unskilled, poorly educated immigrants have upon income inequality and limited work options for Americans at the bottom of the job ladder? I can understand why the Kochs, Sheldon Adelson, and Rupert Murdoch believe in unlimited immigration as business interests have for the last 150 years but why are the Glaesers of academia and the think tanks unwilling to even discuss this?

First, let some European country, like Finland, experiment with a guaranteed basic income and get back with the results.

Finland did launch a UBI experiment and then announced the country couldn't afford it because it would require a 30% tax increase to "scale" it for the country outside the tiny test group. Larry Summers analyzed a reasonably full UBI for the US and suggested it would cost more than the GNP. Switzerland voted on a UBI two years ago and rejected the idea 80% to 20%. The fear is malingering, cost, free riders and economic slumps, not to mention intense social divisiveness between the recipients and those who would see their taxes increase (middle class) to pay for it as the really wealthy hide funds or move outside the tax territory.

As long as poverty is a sum calculated and published by bureaucrats, it will forever exist; for, if poverty were to be eliminated so would those bureaucrats and their agencies.