Institute on Taxation and Economic Policy, Federal Tax Cuts in the Bush, Obama, and Trump Years:

Since 2000, tax cuts have reduced federal revenue by trillions of dollars and disproportionately benefited well-off households. From 2001 through 2018, significant federal tax changes have reduced revenue by $5.1 trillion, with nearly two-thirds of that flowing to the richest fifth of Americans, as illustrated in Figure 1. The cumulative impact on the deficit during this period is $5.9 trillion, including interest payments. 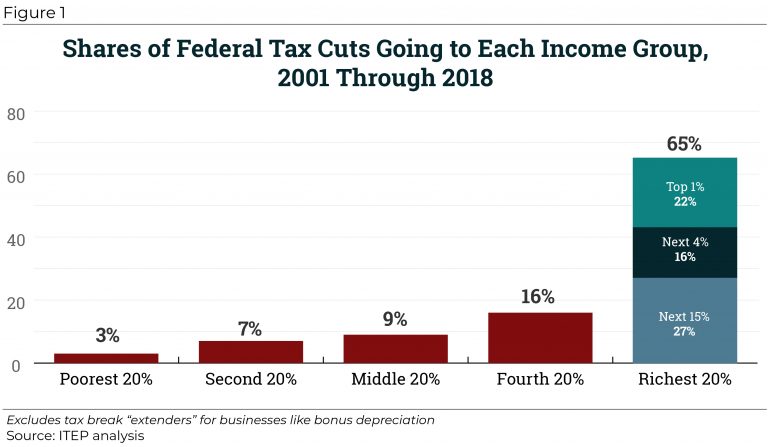 By the end of 2025, the tally of tax cuts will grow to $10.6 trillion. Nearly $2 trillion of this amount will have gone to the richest 1 percent. By then, the total impact on the deficit will be $13.6 trillion, including interest payments.

This analysis does not include hundreds of billions of dollars in so-called tax cut “extenders” for corporations and other businesses that Congress has periodically enacted under each administration. More detailed figures are provided in the tables in Appendix I.

These estimates compare the federal tax law in place each year to the tax law in effect in 2000 (assuming normal annual inflation adjustments as required by law). The term “tax cut” is used in this report to describe the difference between what households pay (including what they pay indirectly through the federal corporate tax) in a given year and what they would pay if Congress had made no changes to tax law after 2000.

Boy, I'm shocked that the top 20% of households, who pay ALL net federal taxes, actually benefited from reductions in marginal tax rates.