Legal Education Gets Its Mojo Back: Fall 2018 Applicants Are Up 8%, June/July LSAT Test-Takers Surge 30%

Does legal education have its mojo back?

The number of people applying to law school for the upcoming academic year shot up 8 percent—the only significant annual increase since 2010. The Law School Admission Council (LSAC) reported that 60,401 people applied for admission this fall, up from 55,580 the previous year. 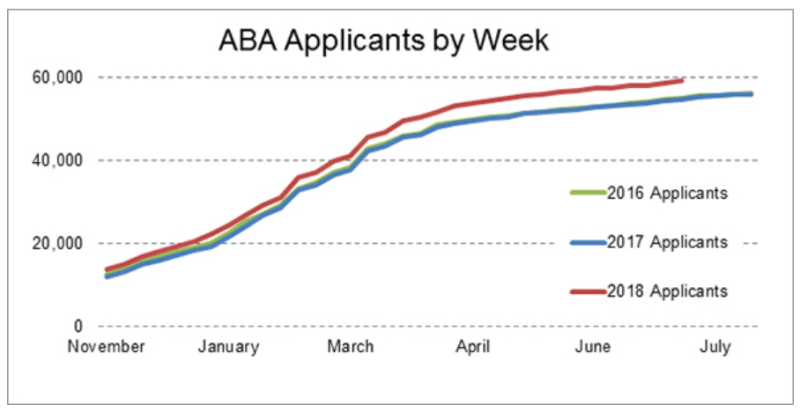 “I’ve heard from a number of schools that this year they are worried about, not under-enrollment, but over-enrollment,” said LSAC president Kellye Testy. “Because the demand was so strong, some schools are finding that they may have had higher yield rates than they had in prior years, and they may have larger classes than they aimed for.” ...

Early indications also suggest that the applicant pool will expand yet again for the 2019 entering class. The number of people taking the Law School Admission Test in June and July was up 30 percent over the previous year. The June and July exams are considered the beginning of the new admission cycle, when early-bird applicants start the process. The June 2017 LSAT clocked a 20 percent increase in takers, foreshadowing the 8 percent applicant increase for the recently completed 2018 cycle.

Also also to be factored is the increasing desperation of LSAC to show growth by hook or crook now that 1 in 10 law schools have adopted the GRE in the last 6-9 months or so and LSAC actually has competition for the first time in its life.

"Who are the people who apply to law school now?"

People who haven't read a newspaper in ten years.

We do know that June '17 to '18 test registrations were down 17% https://lsac.org/lsacresources So it is likely that June '17 to June '18 administrations will also be reported to be down. 67% of registrants this summer were noted to be first-time test takers, but the percentage of first-time test takers reported last summer was closer to 75%. So, yes, policy changes could be a factor.

Who are the people who apply to law school now? How do their ambitions compare to those who applied ten years ago, or twenty?

There was no July administration of the LSAT prior to this year. So we are comparing the number of LSAT takers over two administrations (June/July 2018) versus one administration (June 2018). I imagine the June '17 to June '18 comparison was actually quite a significant decrease. I think it is really unclear if the July '18 administration means added test takers, of if it is just taking from other administrations. Also to be factored in is the new policy that applicants can take the LSAT as many times as they want without limitation or penalty.