Henderson: The Legal Profession Is At An Inflection Point

Executive Summary
Throughout the United States, legal regulators face a challenging environment in which the cost of traditional legal services is going up, access to legal services is going down, the growth rate of law firms is flat, and lawyers serving ordinary people are struggling to earn a living. The primary mechanism for regulating this market is lawyer ethics, including the historical prohibition on nonlawyer ownership of businesses engaged in the practice of law. However, private investors are increasingly pushing the boundaries of these rules by funding new technologies and service delivery models designed to solve many of the legal market’s most vexing problems.

There is ample evidence that the legal profession is divided into two segments, one serving individuals (PeopleLaw) and the other serving corporations (Organizational Clients). These two segments have very different economic drivers and are evolving in very different ways. Since the mid-1970s, the PeopleLaw sector has entered a period of decline characterized by fewer paying clients and shrinking lawyer income. Recent government statistics reveal that the PeopleLaw sector shrank by nearly $7 billion (10.2%) between 2007 and 2012. Throughout this period, the number of self-represented parties in state court continued to climb. The Organizational Client sector is also experiencing economic stress. Its primary challenge is the growing complexity of a highly regulated and interconnected economy. Since the 1990s, corporate clients have coped with this challenge by growing legal departments and insourcing legal work. More recently, cost pressure on corporate clients has given rise to alternative legal service providers (ALSPs) funded by sophisticated private investors. Both responses come at the expense of traditional law firms. 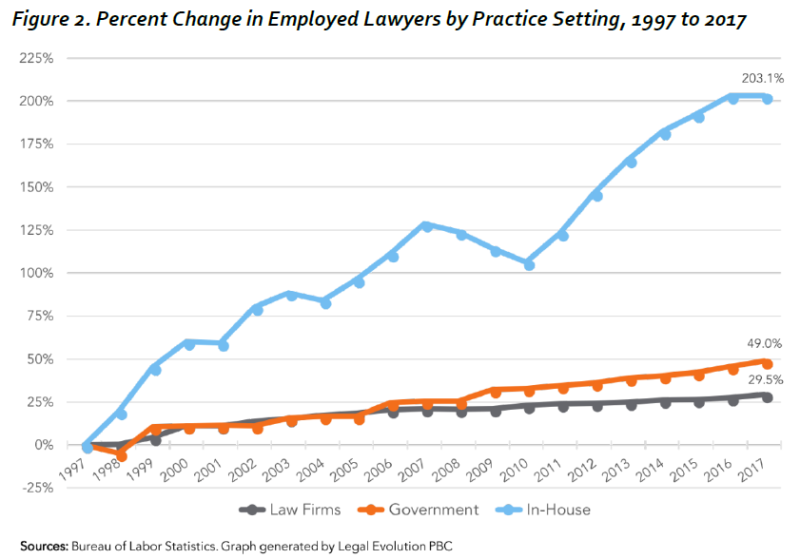 What ties these two sectors together is the problem of lagging legal productivity. As society become wealthier through better and cheaper good and services, human-intensive fields such as law, medical care, and higher education become relatively more expensive. In contrast to medical care and higher education, however, a growing proportion of U.S. consumers are choosing to forgo legal services rather than pay a higher price. 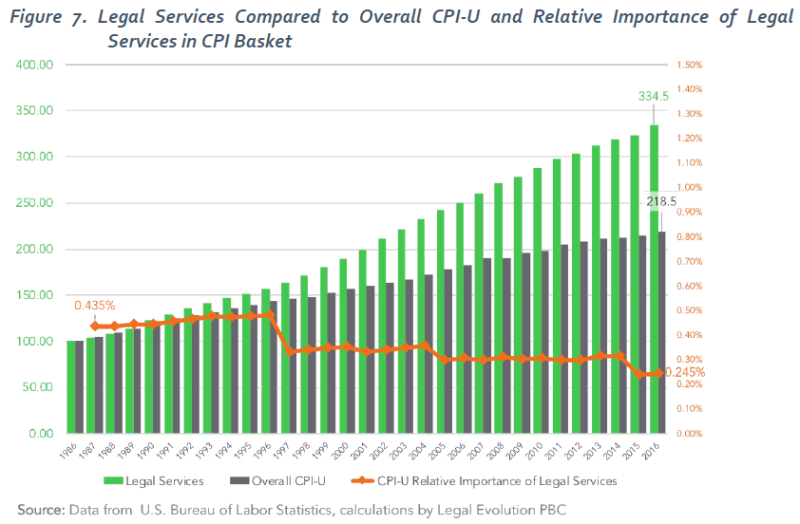 The legal profession is at an inflection point. Solving the problem of lagging legal productivity requires lawyers to work closely with professionals from other disciplines. Unfortunately, the ethics rules hinder this type of collaboration. To the extent these rules promote consumer protection, they do so only for the minority of citizens who can afford legal services. Modifying the ethics rules to facilitate greater collaboration across law and other disciplines will (1) drive down costs; (2) improve access; (3) increase predictability and transparency of legal services; (4) aid the growth of new businesses; and (5) elevate the reputation of the legal profession. Some U.S. jurisdiction needs to go first. Based on historical precedent, the most likely jurisdiction is California.

Maybe people are just getting fewer divorces and DUIs and so fewer individuals need lawyers.

Interesting charts Professor Henderson. The problem with your thesis is that lawyers are often the dumbest guys in the room, outside of a litigation setting. They're annoying, waste time with issues that are often nothing, and almost never grow the business. So I think a better solution would be to take some people out of law schools and move them into another form of training, that would prevent them from being lawyers in the first place.

So a law professor who has never practiced law a day in his life says that lawyers collaborating across other disciplines will produce the enumerated benefits. That's at best agenda-driven speculation.

Lawyers serving ordinary people are not struggling to earn a living. Solo practitioners earn salaries of over $100,000.

The reason access to legal services and the “PeopleLaw” segment is declining, is because more law graduates are pursuing lucrative JD advantage and professional jobs. According to NALP, almost 20% of 2016 graduates obtained JD advantage or professional positions. Corporations and businesses value law graduates more than graduates with a terminal bachelor’s degree. Law graduates are preferred in positions such as corporate compliance and human resources. Stanford reports that several graduates pursued jobs with investment banks and technology firms.

If the legal profession is going to improve access to legal services for ordinary people, the profession should do so by recruiting more students interested in serving ordinary people. Shutting down law schools and relying on false data will only exacerbate the problem.

The “disguise” would fit better if you ever cited anyone else. Since we go over it so very often, I’ll spare everyone the obligatory shortcomings of the ONE peer-reviewed paper that was also heavily criticized by lawyers with graduate training in quantitative social sciences and stopped measuring with the class of 2008, written by the fellow who thinks that the Kochs giving big sums of money to GMU is proof of them discrediting higher education and who also thinks that all law school and lawyer depression is genetic because he’s apparently never read anything about the causes of depression. Moving on…

“Lawyers serving ordinary people are not struggling to earn a living. Solo practitioners earn salaries of over $100,000.”

It’s weird; when I google “average solo lawyer pay” all the articles and studies return $49k.

“Corporations and businesses value law graduates more than graduates with a terminal bachelor’s degree. Law graduates are preferred in positions such as corporate compliance and human resources.”

Ha ha ha! That’s funny stuff. Why, pray tell, do corporations prefer law grads? Because they have 5x the average student loan debt of undergrads and will want to be paid more? Because the Socratic Method means they’ve never seen a contract or know what a compliance department even does? Because they read International Shoe and don’t know anything about accounting or coding? Do McKinsey us some yarns about how modern HR thinks. Go on. Also the unemployment rate for recent law school grads is twice what it is for recent-four year grads but whatever. As anyone who is even remotely familiar with HR outside of Harvard job fairs can attest, employers vastly prefer people with preexisting experience and a raft of certifications in corporate compliance or human resources over a K-JD law school grad with no experience in those fields. In point of fact, modern HR software filters will ensure that no-experience-having law grad’s resume will be auto-rejected without anyone in HR even knowing it was sent to them. See Wharton management professor Peter Cappelli, among others.

Actually, I’ve got your next empirical research paper lined up: gin up a law grad’s resume from a place like Northeastern or Seton Hall where very few people have jobs at graduation and won’t start looking in earnest until after passing the bar, i.e. 7-9 months after graduation. Send such a resume with nearly a year’s worth of blank space to 1,000 entry-level non-law jobs (this will be the hard part, as entry-level jobs don’t exist in the open market anymore; there are internships and jobs requiring 3-5 years’ experience). See if you get more interviews than you have fingers. Spoiler alert! You won’t. You may not get more than you have thumbs.

Guys at my high school used to conflate cultural capital (law degree) with social capital (Stanford alumni network) all the time; it was no big deal. But they also didn’t pretend to be social scientists. If anyone is curious about the difference, read Kellogg professor Lauren Rivera’s* sociology- and business-award winning research into how investment banks, management consultancies, major tech companies, and white-shoe law firms hire. A review of one of her earlier studies in the Chronicle of Higher Education was headlined “Brown and Cornell Are Second-Tier.” Maybe that is why the median starting salary for Stanford Law grads is at least $180k (they don’t release their NALP report but half their grads are BigLaw so…) while the median salary for Seton Hall, where my interlocutor’s sole source of citations used to teach, is, erm, $52,755. Then again, our intrepid pro-law school defender has a way of huffing about “mediocre” law schools and/or students when /she (but he) is feeling smug, so there you have it.

2:27, were you aware that JD graduates regret their degree more than any other? Only 23% said it was worth the cost and 20% said it prepared them for life outside of school. Cite all the self-interested papers you want, but also remember that many of your former students literally hate you, perhaps for good reason.
https://news.gallup.com/poll/227039/few-mba-law-grads-say-degree-prepared.aspx?g_source=link_NEWSV9&g_medium=NEWSFEED&g_campaign=item_&g_content=Few%20MBA,%20Law%20Grads%20Say%20Their%20Degree%20Prepared%20Them%20Well