Moving out of the school's custom-built campus after just seven years will reduce Thomas Jefferson School of Law's rent and possibly help it hang on to its accreditation.

Thomas Jefferson School of Law welcomed students to a gleaming $90 million downtown San Diego campus in January 2011, touting the brand new facility’s state-of-the-art technology and creature comforts, including a meditation room in the 40,000-square-foot law library. The eight-story campus would allow for a modest expansion of the school’s [1,066 J.D. students], officials said.

The timing could not have been worse, as 2011 proved to be the high point of law school enrollment in the United States. Over the next five years, the number of first-year students plummeted 27 percent, with Thomas Jefferson hit especially hard. The school had 521 J.D. students this fall, according to data from the American Bar Association, or just over half as many as 2011.

This week, the school announced it will vacate its custom-built law campus and relocate to a smaller space in a 24-story downtown San Diego office building. ... Thomas Jefferson Dean Joan Bullock characterized the move as “an important investment in strategic planning for the law school, streamlining the educational experience for students and faculty alike,” in a press release. Relocating will allow the school to put more money toward students and less toward rent, according to the announcement. ...

But Thomas Jefferson’s abandonment of its once-heralded campus offers a stark illustration of the struggles lower-tier law schools face amid sagging enrollment, dismal bar pass rates, and financial strain. Standalone law schools such as Thomas Jefferson lack the funding lifeline that comes with being part of a larger university, where the central administration can provide funds to address operating shortfalls.

The ABA in November placed Thomas Jefferson on probation for violating a number of its accreditation standards, including the rule requiring schools admit only students who “appear capable” of graduating and passing the bar and the rule requiring schools to maintain a “rigorous academic program.” The ABA also concluded that Thomas Jefferson had run afoul of the rule that schools have the “financial resources” to operate in compliance with the accreditation standards. The ABA mandated that the school provide a description of its “efforts to reduce its space costs and the impact of any reduction of space on the academic program.” Bullock wrote that the move should help the school return to the ABA’s good graces.

Thomas Jefferson in 2008 took out $127 million in bonds to build the new campus, but by 2013 the debt had become too burdensome. Standard & Poor’s lowered the school’s credit rating and in 2014 Thomas Jefferson entered into an agreement with its bold holders to turn over ownership of the building in exchange for an $87 million reduction in the debt. The school then leased the building back from the bondholders. ...

As the number of students enrolling at Thomas Jefferson fell off, the school lowered it admissions standards. The median LSAT score of its incoming students was 151 in 2011. This fall, that figure was 144. 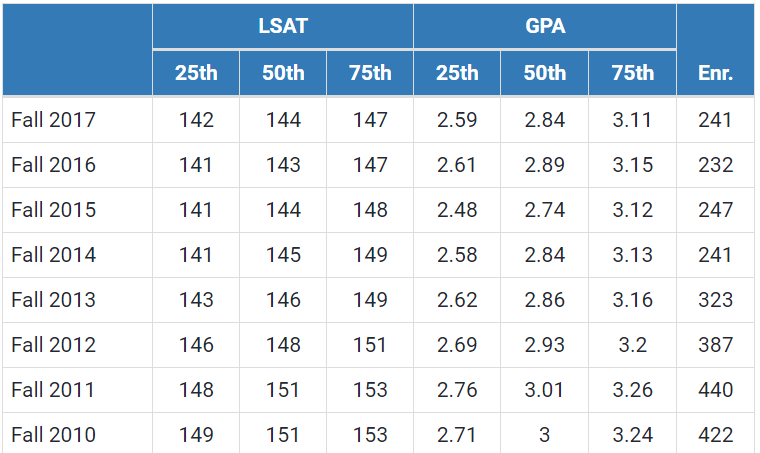 Thomas Jefferson’s bar pass rate, while never impressive, weakened accordingly. In 2012, 56 percent of the school’s first-time takers passed the California bar in 2012. It was down to 30 percent in July 2017—the lowest among the state’s 21 ABA-accredited law schools and 40 percent below the average pass rate among those schools. ...

Thomas Jefferson is leasing 56,000 square feet in its new home, according to Bullock. That’s down from 305,000 at the current location.

I find it fascinating that the bondholders only got a three-year agreement with TJSL to lease the building. I thought the whole point of the restructuring was that the building's highest and best use was as a law school building and there were few other takers.

I cant read the article because of the paywall, so I wonder: What will happen to the building now that TJSL has moved out?