A new report from Judicial Watch reveals a concerted effort from Sen. John McCain’s office to urge the IRS under Lois Lerner to strike out against political advocacy groups, including tea party organizations.

Thanks to the results of an extensive Freedom of Information Act (FOIA) request that has been delayed for many years, Judicial Watch has obtained several key emails from 2013 that chronicle McCain’s and Democrat Sen. Carl Levin’s efforts to reign in the advocacy groups that sprouted immediately following the Citizens United decision from the Supreme Court.

The documents uncovered by Judicial Watch include notes from a high-level meeting on April 30, 2013 between powerful members of McCain’s and Levin’s staffs and Lerner, then-director of tax exempt organizations at the IRS under Barack Obama. The notes reveal the suggestions from McCain’s former staff director and chief counsel on the Senate Homeland Security Permanent Subcommittee, Henry Kerner who urges Lerner to use IRS audits on the advocacy groups to financially ruin them:

In the full notes of an April 30 meeting, McCain’s high-ranking staffer Kerner recommends harassing non-profit groups until they are unable to continue operating. Kerner tells Lerner, Steve Miller, then chief of staff to IRS commissioner, Nikole Flax, and other IRS officials, “Maybe the solution is to audit so many that it is financially ruinous.” In response, Lerner responded that “it is her job to oversee it all:”

Judicial Watch previously reported on the 2013 meeting.  Senator McCain then issued a statement decrying “false reports claiming that his office was somehow involved in IRS targeting of conservative groups.”   The IRS previously blacked out the notes of the meeting but Judicial Watch found the notes among subsequent documents released by the agency. 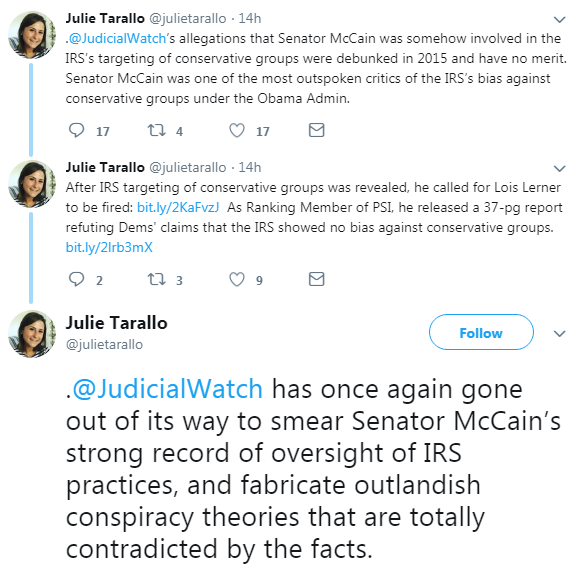 McCain claiming that it wasn't him personally advocating that the IRS squelch free speech is like Obama saying that he didn't advocate the same. Either they had staff doing their bidding or they admit that they were too inept to control them. In both cases, there were no consequences to those advocating and leading the attacks, so that implies consent to the actions.