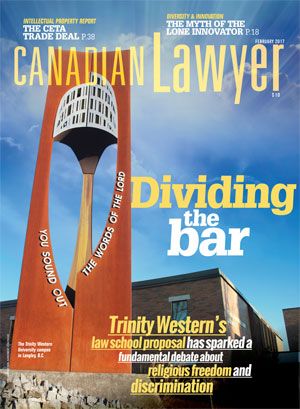 In a highly anticipated contest between religious freedom and equality, most of the court said the limit on religious freedom was a minor one – well short of “forced apostasy,” as five of the judges put it. By comparison, the effects on equality, if the school had been accredited, would have been large enough to threaten the integrity of the legal system, the judges said.

The court had been asked whether the law societies of British Columbia and Ontario were within their rights when they voted not to give licences to graduates of Trinity Western University’s proposed law school at its campus in Langley, B.C. In a pair of 7-2 rulings, the court said they were.

The ruling means the law school will probably never open its doors, as long as it insists on keeping its “community covenant” – an agreement prohibiting its students from sexual intimacy outside of heterosexual marriage. (Same-sex marriage is legal throughout Canada.)

The school indicated on Friday that it may reconsider the wording of the covenant. “We will review the community covenant, I’m sure,” Earl Phillips, executive director of the proposed law school, told The Globe and Mail.

He called the court’s decision a major setback for religious freedom. “This really means that diversity in Canada doesn’t have room for a small, free-standing university with Christian principles to operate a law school.”

Trinity Western, established in 1962, describes itself as Canada’s largest independent Christian liberal arts institution, with an enrolment of 3,600.

Who says the acknowledging of certain rights for special interest groups isn't a zero-sum game?

It should be standard practice to put the term "professional" in quotation marks when referring to accreditation agencies that put political correctness ahead of technical preparedness.

It should be standard practice to put the term "Christian" in quotation marks when referring to institutions with rules like this.

I hope we won't hear any more lessons about tolerance from Canada now.

Diversity for thee but not for me?