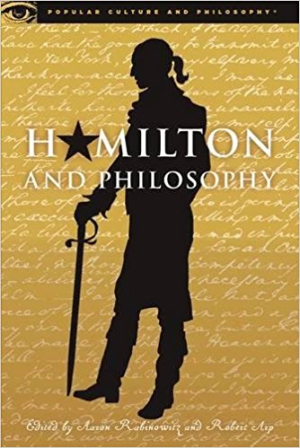 I gotta get back in the classroom:  Professor Carrie-Ann Biondi at Marymount Manhattan College is teaching a course in the fall on Hamilton and Philosophy:

Alexander Hamilton not only participated in the American Revolutionary War as George Washington’s right-hand man, but he also introduced revolutionary ideas into American political philosophy before and during the early American republic. Inspired by Ron Chernow’s biography of Hamilton, Lin-Manuel Miranda created a revolution of his own on Broadway with his smash-hit Hamilton: An American Musical. In this course, we will explore both the political philosophy of Hamilton and examine various philosophical issues surrounding the creation and reception of Miranda’s Hamilton.

Professor Biondi contributed a chapter (Legacy and Happiness in Hamilton: An American Musical) in the book Hamilton and Philosophy (2017):

In Hamilton and Philosophy, professional thinkers expose, examine, and ponder the deep and controversial implications of this runaway hit Broadway musical.