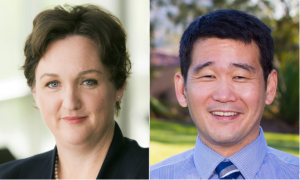 Katie Porter, a professor at the University of California, Irvine School of Law, on Tuesday narrowly defeated her faculty colleague, David Min, to secure a spot on the ballot for a Congressional seat following a hard-fought primary that turned ugly.

Porter snagged 20 percent of the vote—the second-highest percentage behind Republican incumbent Mimi Walters, for whom 53 percent of voters cast their ballot. Min won 17 percent of the vote, but only the top two vote-getters will appear on the November ballot under California’s primary system. (The results aren’t final, as absentee ballots have until Friday to arrive, but Porter currently has a 2,600 vote lead over Min.)

The pool of law professors who run for federal office is fairly small, and it’s highly unusual for two professors from the same campus to compete against one another for the same seat.

The two had enjoyed a friendly relationship before the campaign. Porter said she helped to recruit Min to U.C. Irvine law school five years earlier, and he graduated from Harvard Law school one year after she did. But their relationship has soured amid the campaign, with Porter accusing her faculty colleague of dragging details about her divorce into the spotlight and Min denying involvement.