A private Phoenix law school told its students and faculty by email late Friday that the American Bar Association plans to pull the school's accreditation.

The decision, which is subject to appeal, means that Arizona Summit Law School cannot accept new students and must put together a plan to ensure current students are able to complete their law degrees and take the Bar exam.

The law school has been on probation by the ABA since March 2017 and a notice published on the ABA's website Friday said that after a review in May, the ABA finds the school is still out of compliance with ABA standards for program rigor and academic support.

Don Lively, the school's president and founder, confirmed that the school will be putting together a "teach out" plan, as required by the ABA, to ensure current students can get their law degrees.

The school has 30 days to appeal the decision, and Lively said the school intends to appeal. During this time, the school remains accredited.

"We have done exactly what the ABA asked us to do: increased admission standards, revamped curriculum to ensure rigor and fortified academic support," he said.

The ABA's decision to pull accreditation "seems unduly harsh for an institution that has performed well for most of its history, took appropriate curative action in a timely manner, and to this day remains in compliance with bar pass standards."

School officials said that Arizona Summit currently meets the ABA standard for bar passage because the bar association sets the standard at 75 percent passing in three of the past five years in all states where graduates take the test.

The Council of the Section of Legal Education and Admissions to the Bar of the American Bar Association (the “Council”), at its meeting on May 10-12, 2018, considered the status of Arizona Summit Law School (the “Law School”) and determined to withdraw the approval of the Law School, located at 1 North Central Avenue, Suite 1400, Phoenix, Arizona 85004. The Council’s May 2018 determination follows its finding of continuing non-compliance with Standards 301(a), 309(b), and 501(b) and Interpretations 501-1 and 501-2.

The Law School has a right to appeal this decision to the Appeals Panel pursuant to Rule 4 and Rule 36 of the Rules of Procedure. The appeal must be filed no later than July 9, 2018.

The Council Decision Letter requires the Law School to publish this notice or a link to this notice on its website in a form and place acceptable to the Managing Director. This statement is also being published on the website of the Section of the Legal Education and Admissions to the Bar.

This public memorandum is being issued pursuant to Rule 53(c)(6) of the Rules of Procedure for Approval of Law Schools.

Here are Arizona Summit's enetering class and bar exam data for the past eight years: 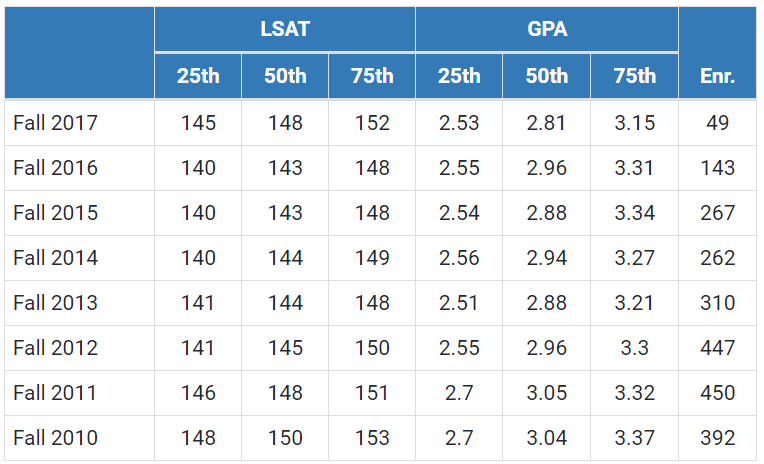