University Of Minnesota Increases Law School's Annual Subsidy To $12 Million Amidst Declining Applications, Enrollment (On Top Of $40 Million Subsidy Since 2012-13)

Still suffering from a steep drop in student applications, the University of Minnesota School of Law says it can’t balance its budget without even more help from the rest of the university.

Since 2012-13, the U has given the law school $39.9 million to cover budget shortfalls. The ongoing annual subsidy has reached $7.5 million.

President Eric Kaler is proposing to increase the yearly subsidy to $12 million by 2020-21, while also covering a $1.9 million shortfall next year.

The law school has seen its applications fall by more than half since 2010 as the nationwide trend away from legal education has hit the Midwest especially hard.

Rather than admitting lower-quality applicants, the U has stuck to its high standards in order to maintain its place as the No. 20 law school in the country, according to U.S. News and World Report.

The school’s J.D. enrollment fell to 555 this year from 752 five years earlier, and it had to step up financial aid offers to field that class.

To offset the drastically shrinking revenue, Dean Garry Jenkins said the school has cut $6.3 million in recurring expenses since 2014. The number of faculty is down 21 percent and staff 14 percent.

It hasn’t been enough. ... Jenkins told regents Thursday that the additional money from the U — $3.6 million, $3.2 million and $4.5 million in the next three years — should eliminate the school’s structural deficit. 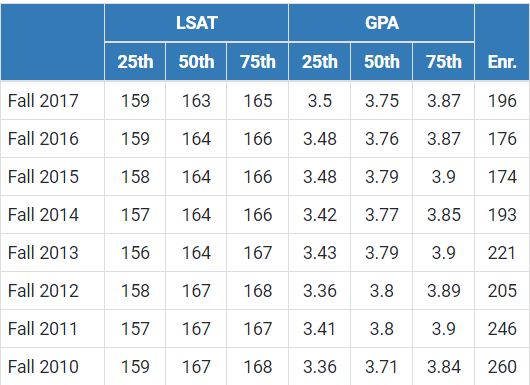 Obligatory reminder that likely every law school that has reduced enrollment to keep quality and/or had to greatly increase tuition discounting is also running at a loss. Something to keep in mind as Congress mulls decimating graduate federal student loans.