The Success Of A Disruptive Leader Depends On Her Successor 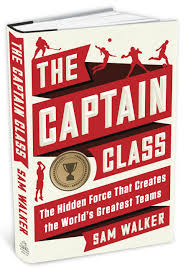 Interesting inaugural piece in the Wall Street Journal's new column on the lessons and strategies of leadership, The Captain Class, by Sam Walter (author, The Captain Class: The Hidden Force That Creates the World's Greatest Teams (2018)):  One Leader Sent Boeing Into a Hurricane; Landing It Was the Next Guy’s Job:

Jim McNerney’s tenure shows that the success of a disrupter often hinges on who comes next.

Boeing ’s board of directors knew one thing for certain when they handed the institutional yoke to Jim McNerney in 2005. The incoming chief executive planned to steer the aerospace giant straight into the turbulence.

This wasn’t a tactical blunder. Turbulence was the whole point.

Boeing’s deepest problem in 2005 was a universal one:  No empire rises forever. The company had been floundering, and the digital revolution was barging down the gangway. The board figured it was time to buckle up.

The tricky thing about reforming Boeing was the weight of its heritage. Many of its veteran engineers and machinists viewed technological innovation as a higher calling, a culturally inviolable pursuit.

In theory, there may be a gradual way to renovate a proud old institution, but that’s rarely how it happens. History shows that it usually comes down to one determined individual—someone who bursts through the door swinging a 7-iron. ...

Disruptive leadership has become a less novel concept for most Americans, given the modus operandi of President Donald Trump. The business world, by contrast, has met these folks before, whether it was Arthur “the Ax from Saks” Martinez at Sears, “Chainsaw” Al Dunlap at Sunbeam, Steve Jobs at Apple , Ron Johnson at J.C. Penney, Marissa Mayer at Yahoo or John Flannery’s early work at GE.

Liz Wiseman, who studies “high-impact” leaders, divides them into “multipliers” and “diminishers.” Both species embrace conflict, are ruthlessly direct and intellectually irreverent. The major difference, she says, is intent.

A multiplier’s goal is to light a fire that helps people think big (Apple’s Mr. Jobs comes to mind). A diminisher uses disruption as a means of self-aggrandizement, which can lower performance.

“Sometimes you need someone who’s a bit of a wrecking ball,” Ms. Wiseman says, “but we also need leaders who can draw on the capability of the team.”

Depending on whom you ask at Boeing, Mr. McNerney might land in either category. ...

From 2007 to 2011, as it weathered internal turmoil and the global financial crisis, Boeing’s revenue remained flat. By 2014, however, thanks to surging global demand for commercial jets, it had climbed to a record $90.8 billion. The following year, Boeing’s share price hit an all-time high. Over Mr. McNerney’s full 11-year tenure, Boeing’s stock handily outperformed the S&P 500.

The company’s workers never did warm up to the boss. When he retired in March 2016, one union official issued a frosty statement. It began: “CEOs come and CEOs go...”

As Mr. McNerney sees it, these sore feelings had less to do with his personal style than the difficulty of what needed to be done. “The act of leadership is not always comfortable,” he said. Nonetheless, he added, “I didn’t try to confront people with their shortcomings. I tried to remind them what made them great and reconnect them to it.”

It can be hard to say whether a CEO’s bold actions genuinely changed the outcome, or even whether they suited the gravity of the circumstances. It also seems unfair to grade these leaders in isolation. At Boeing and many other mature companies shaken up by disrupters, a lot depends on who comes next.

Dennis Muilenburg, Boeing’s current CEO, was Mr. McNerney’s handpicked successor and, in many ways, his opposite. A low-key engineer who joined the company as an intern, he made a point of spending time talking to workers—a contrast to his predecessor, who was often viewed as personally remote. ...

In 2017, aided by stock buybacks, roaring demand and an impending tax cut, Boeing’s share price nearly doubled. The company delivered a record 763 jets, recorded $13.3 billion in operating cash flow and paid out the largest employee bonuses in its history.

Mr. McNerney’s hard-fought reforms clearly played a role, but only to a point. Unlike many chief executives who’ve followed disruptive acts, Mr. Muilenburg avoided two classic mistakes. He didn’t maintain the same turbulent course—that almost never works. Critically, however, he also didn’t try to put everything back the way it was.

By adopting a muted style and making a few cultural readjustments, Mr. Muilenburg banked a load of goodwill. He spent this capital to continue implementing his predecessor’s best ideas.

What Boeing’s story suggests is that the turbulent stretch of the journey doesn’t define the flight. The climactic event is picking the next pilot.