The Persistence Of Dumb Contracts 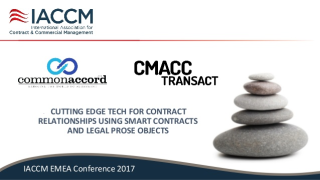 I'm going to spend this summer working on a project about language, law, and code — what lawyers with meat rather than silicon brains are likely to retain as their domain over the foreseeable future.  Hence, The Persistence of Dumb Contracts.  I want to say a couple words about it, but only to highlight a convergence with the cutting edge practical work of James Hazard (founder of CommonAccord) and others at the intersection of contracts and computers.

As to the paper, I would link you to something but it's not nearly ready for prime time.  For the time being, consider the development of doctrine over the last 150 years or so regarding the parol evidence rule and the interpretation of the contractual text.  It's an ontological issue — is the "reality" of the deal bound by the metaphoric "four corners" of the document or is the text a mapping onto something else?  An early paragraph from an early draft of the intro:

Now imagine this debate in the context of digitally documented transactions that span the complexity gamut from one-shot commodity sales to longer term relationships like commercial leases or shareholder agreements. There is or will be a continuum across which “smarter” contracts will do less mapping of antecedent understandings and create more generally accepted social realities than dumber ones. I see no point in trying to create mutually exclusive sets. At one end of the continuum, the smart contract is little more than a cybernetic artifact like Bitcoin, a virtual dollar bill having a social ontology and no less a fixed and timeless meaning than a physical Federal Reserve note. At the other end, it is like more than a digitized form into which someone plugs a few chunks of data and comes out with a Kindle book or a mortgage loan. Somewhere in the middle, say in connection with a program that can sort out the puts and takes of ten years’ worth of contingency in a 50,000 square foot office lease, the contract needs to be able to create virtually a world of real estate business and law that either maps on or substituted for the physical version. Dumb contracts will persist, and the extent to which individual contracts are dumb rather than smart will depend on the extent to which there is utility to smartness or dumbness in the particular circumstance.

As to Jim Hazard, my colleague, Gabe Teninbaum, who directs Suffolk Law's Institute on Law Practice Technology & Innovation, introduced us.  Jim's passion and project is CommonAccord.org, "an initiative to create global codes of legal transacting by codifying and automating legal documents, including contracts, permits, organizational documents, and consents."

These are my words, not Jim's, but I think a fair description. If we dissect the thinking that goes into a contracts, we can see that there are (1) deductive and code-able elements to the structure of an enforceable contract, (2) prose articulations of the underlying agreements, some of which are far more difficult than others to translate into machine language, (3) patterns of past articulations that have gained common meaning (i.e. boilerplate), and (4) judgments that need to be made about the transaction that either heretofore have no solution baked into the code or which contradict that which would be offered up by the code.

As to the convergence, my interest thus far has primarily been point (4) - those aspects of business lawyering judgment that are the most difficult to capture in machine thinking.  Jim is working from the other direction - what can we can build from rules, standardized text, and distributed data shared on Github that allows parties to hit the optimum mix of smart and what I call "dumb" contracts.

So I'm embarking on a mission to learn the trees as well as the forest of automated contract drafting - more to come!

my understanding of “smart contracts” is that such things are supposed to be self-enforcing (via computer code), while “dumb contracts” must be enforced by a third party (e.g. courts, arbitration panels, or a drug lord, in the case of illegal drug deals)