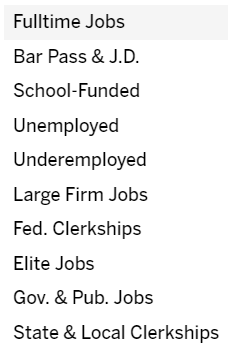 The American Bar Association this month released new law school employment data that showed the class of 2017 fared better in the entry-level job market than its recent predecessors.

We’ve waded through the ABA’s trove of employment numbers to break down how schools performed in 10 different areas, including sending graduates into jobs for which bar passage is a requirement; into federal clerkships; into large firm jobs; and government and public interest positions. We’ve also ranked schools according to their percentage of unemployed recent graduates, as well as each school’s underemployment rate—which includes graduates who are unemployed, in part-time or short-term jobs, or in non-professional jobs.

Our charts illustrate how stratified legal education is when it comes to graduate employment. For instance, seven law schools sent 90 percent or more of their 2017 graduates into full-time law jobs that require bar passage, largely considered the gold standard for law jobs. (They were led by Duke Law School, at nearly 94 percent.)

On the other end of the spectrum, 12 schools sent fewer than 40 percent of their recent graduates into those positions. (Thomas Jefferson School of Law reported the lowest percentage outside of Puerto Rico, at less than 26 percent.)