In this article I offer new evidence about something readers of Academic Questions already know: The political registration of full-time, Ph.D.-holding professors in top-tier liberal arts colleges is overwhelmingly Democratic. Indeed, faculty political affiliations at 39 percent of the colleges in my sample are Republican free—having zero Republicans. The political registration in most of the remaining 61 percent, with a few important exceptions, is slightly more than zero percent but nevertheless absurdly skewed against Republican affiliation and in favor of Democratic affiliation. Thus, 78.2 percent of the academic departments in my sample have either zero Republicans, or so few as to make no difference.

My sample of 8,688 tenure track, Ph.D.–holding professors from fifty-one of the sixty-six top ranked liberal arts colleges in the U.S. News 2017 report consists of 5,197, or 59.8 percent, who are registered either Republican or Democrat. The mean Democratic-to-Republican ratio (D:R) across the sample is 10.4:1, but because of an anomaly in the definition of what constitutes a liberal arts college in the U.S. News survey, I include two military colleges, West Point and Annapolis.1 If these are excluded, the D:R ratio is a whopping 12.7:1. 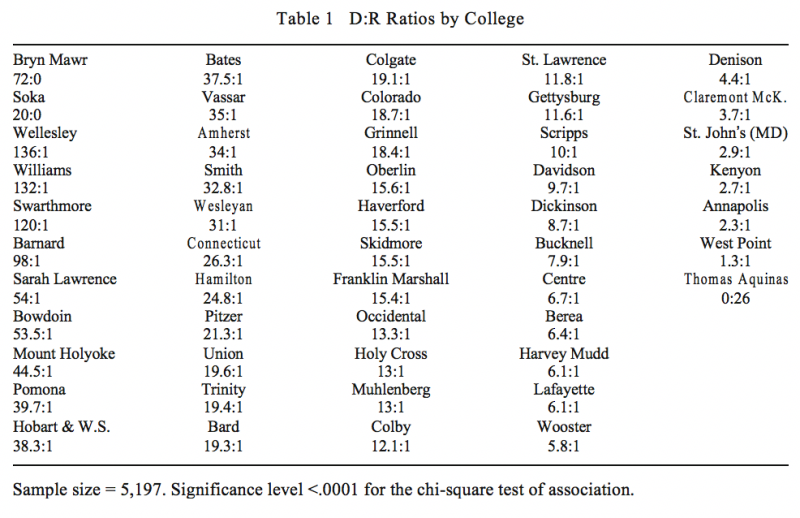 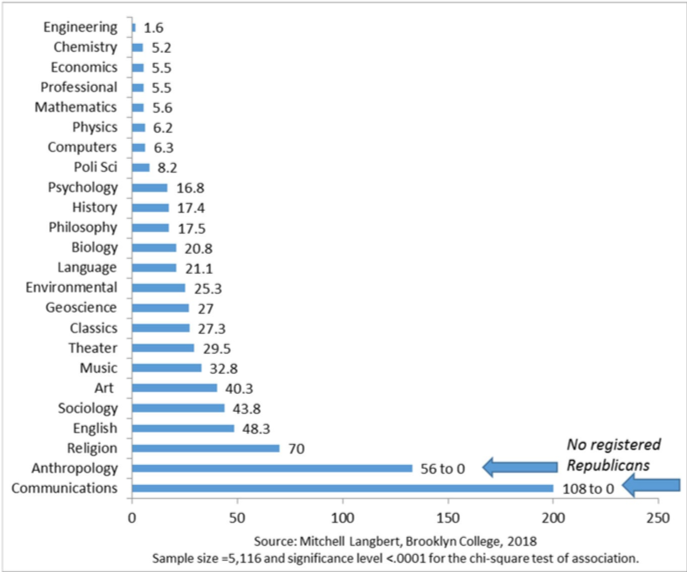 I know how professors outside the humanities lean politically. I've read the best available research over at Inside Higher Ed. Do you care to know what they found? It's not what you think, frankly, even in business schools.

And that is why this country is so screwed up today.

Recommend we technically trained individuals whom design, implement and maintain the machinery that art history books are printed with, semiconductors are fabricated from and programming of social event back-office functions tell these useless idiots to do this stuff themselves.- it would be like watching one of the idiots try and give you back correct change when you place your hand over the display which tells them how many coconuts to give back.

There were 1.92 million bachelor's degree graduates in 2015-16. 371k of them were business majors, a number that grows each year. The entirety of the social sciences and history were 161k graduates, a number that is declining each year, and in fact is barely higher than the number of social sciences and history graduates in 1971 (!), when there were but 839k college graduates. In point of fact, there were more MBAs (186k) produced in 2015-16 than undergraduate social science and history majors. https://nces.ed.gov/programs/digest/d17/tables/dt17_323.10.asp?current=yes. Even if you add area, gender, and ethnic studies, English, foreign languages, general studies, and philosophy majors, you still aren't anywhere close to the number of undergrad business majors. But this of course gets to my overarching point: the majors with the most bodies are not the liberal arts, despite the right's continual attempt to paint gender studies profs and politics as representative of overall higher ed. How often do we see people whingeing about how everyone majors in gender or ethnic studies today instead of whatever rote vocational training they *should* be receiving? And yet per that link area, ethnic, cultural, gender and group studies accounts for... 0.4% of majors.

If we tally business, STEM, and *professional* majors like the health sciences and law enforcement / criminal studies, we have over one million graduates, well over half of all four-year college graduates. But no one from the right is ever interested in finding the political affiliations of the business professors. Or the engineering professors. Or the criminal justice professors. Nay, they remain content to focus on the women’s studies and sociology profs; the results make it so much easier to demonize higher ed. Sadly, corporate America is happy to follow along in its own way, chiding college students more than ever for not majoring in *relevant* subjects so as to obviate the need to spend any money on employee training – even as college students study those *relevant* subjects in far greater numbers and percentages than in decades past, in that sunnier era when corporations still felt a duty to train their own new hires.

I would be very curious about whether the Trump nomination had an effect on these numbers. I'm also curious as to how party registration was determined, as this means different things in different states.

I did some research. From the Federal Election Commission, I downloaded all donations to presidential candidates made from September 2015 through April 2016 (the primary season). For each donation, the FEC logs the recipient and amount, and the donor's name, address, and employer. I extracted donations from employees of the 92 universities and colleges with at least 5,000 undergraduates and median SAT scores of 1290 or more. This list included every large elite institution.

The donations in question amounted to just over $3M. Of this amount, over 90% went to Democrats (61% to Clinton, 31% to Sanders). All 16 Republicans together, including four incumbent and four former governors, and four incumbent and one fomer senators, received only 8%. (All employees were included, not just faculty and adminstrators - for instance, athletic coaches, maintenance workers, and IT staff.)

So we know: the academy is very solidly Left.

Some people (Jim in NC) mistake being "well-educated" for having actual intelligence.

There is work addressing some of the questions raised in one of the comments above, including looking at party affiliation and at various sorts of higher ed institutions and different departments. Here is a link to a story that in turn links to a number of those studies: https://www.insidehighered.com/news/2017/02/27/research-confirms-professors-lean-left-questions-assumptions-about-what-means

A significant swath of the unaffiliated voted for Trump.

Unemployed Northeastern, I found your comment interesting and looked up Mitchell Langbert. Curiously enough he is an associate professor of Business Management at Brooklyn College. I am sure he is well aware of the political orientation of Business School professors.

There's a considerable constituency for the Democratic Party among serving military, and it's stronger int he officer corps than it is among enlisted men. On campuses, you might see that degree of diversity on business or engineering faculties, not anywhere else. Business and engineering faculties might account for about 20% of the professoriate.

Business is far and away the largest undergraduate major.

These schools are an odd corner of academe. However, it's a reasonable wager that the ratios are similar on the arts-and-sciences faculties of more conventional institutions, as well as occupational faculties for social work, teacher training, library administration, and the vocational-professional wing of psychology. The implications of this are that a great deal of intellectual life is apologetical in nature, and merits no public subsidy. The other implication is that institutions are sandboxes for their (faculty) employees. Harsh counter-measures are called for.

It's funny how they keep making studies of sociology professors at Oberlin and Middlebury as if it is even remotely representative of higher ed writ large. Business is far and away the largest undergraduate major. Why not study the political affiliations of those profs? How about Nursing professors, since that's the next biggest major? No?

And say, why doesn't the study list the percentage of professors at these institutions who are actually registered as Republicans or Democrats? I see only one institution's data, listed in dicta as an explanation to a table: "For example, I identified 254 full-time, Ph.D.-holding professors at Williams. Of these, 132 are registered Democratic, and one is registered Republican, so the D:R ratio is 132:1." So really we only know the political affiliations of just over half the faculty (133 of 254), and not even that, since the study ever-so-conveniently chooses to not find the political affiliations of non-PhD faculty (We don't need to know what the MBAs think!), NTT, part-time, and adjunct faculty.

This doesn't reflect the condition of the Republican Party, which is cyclical, but this represents a long-term trend towards blocking anyone from teaching who "doesn't think right" according to the left.

The ratio at the upper levels of the military officer corp were 9:1 the last time I looked. Are we supposed to engage in some form of corrective action to get the ratios in academe and the military closer to 1:1?

I would have thought it would be much higher given the condition of the Republican Party.