Inside Higher Ed, Study Says Students Rate Men More Highly Than Women Even When They Are Teaching Identical Courses:

A new study in PS: Political Science [Gender Bias in Student Evaluations] combines elements of prior research on gender bias in student evaluations of teaching, or SETs, and arrives at a serious conclusion: institutions using these evaluations in tenure, compensation and other personnel decisions may be engaging in gender discrimination.

“Our analysis of comments in both formal student evaluations and informal online ratings indicates that students do evaluate their professors differently based on whether they are women or men,” the study says. “Students tend to comment on a woman’s appearance and personality far more often than a man’s. Women are referred to as ‘teacher’ [as opposed to professor] more often than men, which indicates that students generally may have less professional respect for their female professors.” 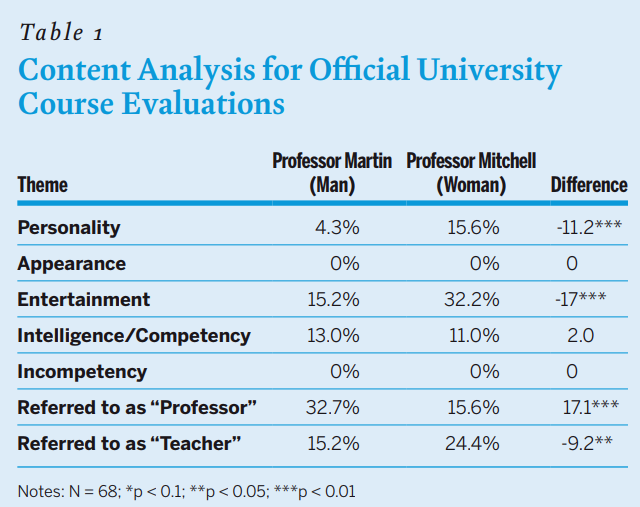 Based on empirical evidence of online SETs, it continues, “bias does not seem to be based solely (or even primarily) on teaching style or even grading patterns. Students appear to evaluate women poorly simply because they are women.

Our research shows they’re biased against women. That means using them is illegal. ...

A new study I published with my co-author examines gender bias in student evaluations. We looked at the content of the comments in both the formal in-class student evaluations for his courses as compared to mine as well as the informal comments we received on the popular website Rate My Professors. We found that a male professor was more likely to receive comments about his qualification and competence, and that refer to him as “professor.” We also found that a female professor was more likely to receive comments that mention her personality and her appearance, and that refer to her as a “teacher.” ...

This is not to say we should never evaluate teachers. Certainly, we can explore alternate methods of evaluating teaching effectiveness. We could use peer evaluations (though they might be subject to the same bias against women), self-evaluation, portfolios, or even simply weigh the evaluation scores given to women by 0.4 points, if that is found to be the average difference between men and women across disciplines and institutions. But until we’ve found a way to measure teaching effectiveness that isn’t biased against women, we simply cannot use teaching evaluations in any employment decisions in higher education.

Ha ha ha. Some people are just better at what they do.

"It will need more than the Nineteenth Amendment to convince me that there are no differences between men and women...." Justice O. W. Holmes, Jr.

As always, there are explanations other than bias.

1. By the time students reach college, they've spent twelve or more years with "teachers" not "professors," and the great bulk of those teachers were women. They've come to regard woman = teacher and in many cases man = coach. Not having a the coach option, they shift to professor. And why not. These are just words.

2. Unstated dress codes give women far more freedom in how they dress than they do men. That means they can dress badly or well. How do you evaluate the "appearance" of men when they dress almost all alike? You can't, hence the lack of such comments.
-----
This is typical of social science research. It's often poorly done and with an axe to grind. One could just as easily conclude from the data above that women professors should be faulted for not communicating their professional skills better to their students. And a professor who can't convince his or her students that they know their subject well is failing in one of his or her primary tasks.
----
I'll add an additional comment. I've not worked in academia, but I did work on the nurse staff of a major children's hospital whose nursing staff—given the attraction pediatrics has for women—was 98% female. That provided me with ample opportunities to see how I as a male different from my female co-workers. And keep in mind the staffing was so one-sided, during my 26 months there, I had a male nursing co-worker for only ten minutes. Other than that, I was surrounded by women doing much the same work as I.

Two differences stood out most:

1. Male aggression and dominance. I was more aggressive and willing to take risks and buck the status quo when I thought that best served my patients. And when I got flack from the nursing administration for that, I didn't care. I'd done the right thing and that was what mattered.

2. Male ego. I attached a much greater importance to winning the respect of my patients than I did to simply being liked. The nurses I worked with often became frantic under stress. I made a great effort to appear calmer and more in control. One result was that, by winning their respect, I was also liked.
----
Interestingly, those who liked my behavior most weren't that removed from young women in college. They were the teen girls, whose attitude toward me was so respectful, I often felt like I'd become their "Dr. Mike." If you want to know the specifics, you will have to read a book I wrote for hospital staff called Embarrass Less.

Stated simply, those hospitalized teen girls felt vulnerable and liked being cared for by me because my aggression and calm competence meant I'd fight for them much more effectively than their female nurses. Women under stress tend to respond with "tend and befriend," but realize that's not always the best response. That's why they like having real men around whose instinctive response to danger is 'fight or flight,' particularly the fighting.

That's precisely what happened during that only-ten-minute episode when I worked with another male. I was caring for four girls whose spinal fusions had left them helpless, restricted to lying on their backs in bed. The room was hot, so they were wearing nothing under their flimsy gowns. They and I had reached an agreement. They'd be casual, rolling on their sides to cool off, while I wouldn't look. Then that male float showed up, and I quickly picked up that he wanted to linger in their room and leer.

I liked those girls, and that ticked me off. I knew they'd grow uncomfortable with his behavior, but wouldn't do anything in protest. I wasn't hindered by that, so my wonderful "toxic masculinity" came to the fore. I wasn't going file an incident report or something equally ineffective. I was within seconds of confronting him, making clear that he was not to enter their room and that, if he did, I'd physically toss him out, when he was sent elsewhere. I was actually disappointed that there'd been no confrontation.

That's why those girls liked having me as their caregiver despite its complications. And it is, I suspect, why women attach a greater value to discovering a competent male who likes them than to similarly capable women who're emotionally similar to them. It's that male bent toward aggression that women like, particularly when it can be turned to their favor.

Just to be provocative: if schools practice affirmative action for women, isn't it possible the male professors are (on average) a little bit better?

The female in the study was a non-tenure-track instructor. She was not a professor. That might be the reason she was not referred to as 'Professor'.

The study also assumes that there is no actual difference in the quality of their teaching. This might be a potential confounding factor.

“Our analysis of comments in both formal student evaluations and informal online ratings indicates that students do evaluate their professors differently based on whether they are women or men,” the study says. “Students tend to comment on a woman’s appearance and personality far more often than a man’s"

Unless I am missing something, the chart attached to this article supports the idea that students comment more on female professors' personality more, but that there is no difference on comments on appearance. In fact, appearance comments are zero in both genders. Am I missing something?

But even if Mr X and Ms Y are teaching two sections of the same course, using the same syllabus and reading list, how can you prove that there is no difference in their teaching style/effectiveness other than their gender?

No it doesn't. It shows different ratings. It does not show that the male and female professors are on average equal in every way. That is a hidden and false assumption.

The female professors are rated on average 11 percent higher than the male professors in personality. Is that difference real or is it bias? Or should we only be concerned about categories for which average ratings for women are lower? Isn't that also bias?