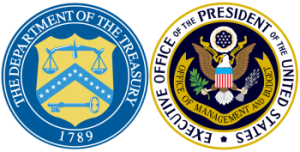 Treasury and OMB released a joint Memorandum of Agreement on Thursday that gives the budget office significant new authority to review tax regulations before they take effect. For instance, OMB's Office of Information and Regulatory Affairs will be able to review proposed regulations that affect the economy by $100 million or more, raise new legal or policy issues, or run counter to actions planned by another agency.

The agreement also bars Treasury from publishing in the Federal Register "or otherwise publicly" releasing "any tax regulatory action" covered by the memo, "unless OIRA notifies Treasury that it has waived or concluded its review." ...

Over the objections of Treasury Secretary Steven Mnuchin, Mulvaney pushed to scrap a 34-year agreement that gave Treasury a relatively free hand in writing tax rules and regulations.

The Trump administration ended an internal dispute and the result will shape regulations under last year’s tax law, giving the Office of Management and Budget more involvement and authority in the process.

Under the agreement, OMB will review significant Treasury tax rules, especially when they create novel policy issues or potential conflicts with other agencies. OMB and the Treasury Department announced the agreement on Thursday after months of negotiations.

That is a departure from the past 35 years, when Treasury’s tax regulations were largely exempt from the cost-benefit analysis and other scrutiny from OMB’s Office of Information and Regulatory Affairs.

“A reflection of tremendous coordination between Treasury and OMB, today’s agreement ensures increased accountability and transparency for the American people as we continue to implement tax cuts across the country,” said OMB Director Mick Mulvaney. OMB’s backers say tax regulations shouldn’t operate much differently from others and that more cost-benefit analysis is important. ...

Treasury’s supporters counter that OMB’s involvement would slow down the process and potentially open new avenues for lobbying and political interference.

The Treasury Department has relinquished some of its authority over implementation of the Trump tax cuts, with Treasury Secretary Steven Mnuchin ceding the ability to review regulations to the White House Office of Management and Budget, which is headed by Mick Mulvaney.

An agreement announced on Thursday by two of President Trump’s top economic advisers marks the end of a monthslong turf war that some tax experts feared could delay rollout of the law. The agreement centralizes more power within the White House, giving it more control over how the tax bill, including some of its murkier provisions, is interpreted.