More Evidence That Student Evaluations Are Biased Against Women 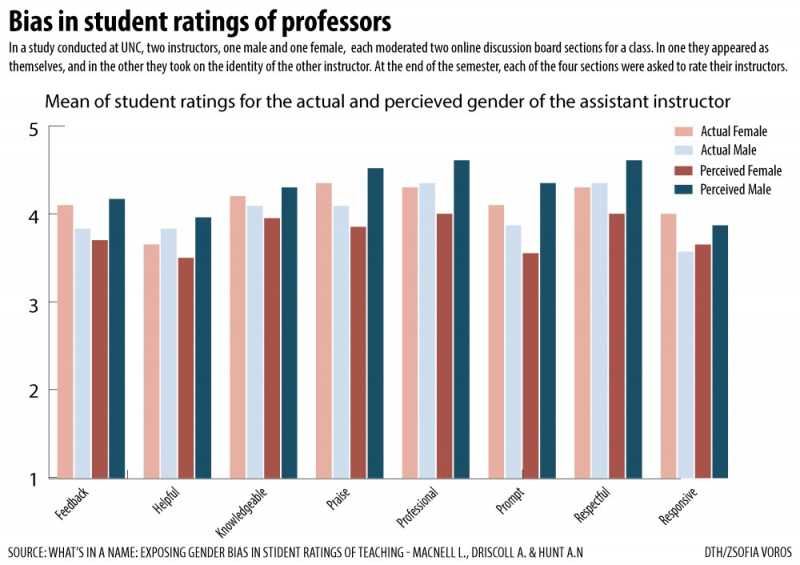 For professors, student evaluations are used to assist decisions on promotions, raises and tenure. But research from North Carolina State University shows that the evaluations a professor receives are linked to their gender, with male professors receiving higher and more favorable ratings than female professors [What’s in a Name: Exposing Gender Bias in Student Ratings of Teaching].

In 2014, researchers at N.C. State used online courses, where an instructor’s gender could be hidden, to test this gender bias. Four sections of an online class were taught by two instructors: a female instructor and a male instructor. Each taught two sections, using their true identity for one and adopting a name of the opposite gender for the other.

If this study were double-blind its data would indicate some unconscious bias by students. If not, professors who know they are faking their sex might also unconsciously tilt the results.

So how do student evaluations where the actual female scores significantly higher four times more often than the actual male show a bias, "with male professors receiving higher and more favorable ratings than female professors." And even more important when the debate is over promotions, what's the point of even discussing deceptions that flip a professor's perceived sex? That's never true for classroom teaching and, most important of all, it is never true when professors are evaluated by their colleagues.

So why does this news story spin around the deceptive perceived female/male numbers? Sidney Webb, a major scientific researcher on the British left in the early decades of twentieth century explained why. Don't bother to lie in your actual numbers, he explained, news reporters and the like won't bother to read much less study those. Lie as much as you want, he said, with the summary. That's what will be reported.

To the extent that this research proves anything, its demonstrates that student perceptions of professors are influenced in ways that favor women professors over male professors when their sex is actually known. Translated into the language that only sexism results in unequal outcomes, that means that these students are displaying sexism toward male professors. I say that again, male professors.

And those who want to find some value in that otherwise pointless data that is deceptive about a professor's sex, it's that students perceptions become confused when a male professor is presented as a female and a female as a male. But note again the results. The researchers attempt to claim that the higher scores for the perceived male illustrate a bias against women. That's not true. The perceived male of those higher numbers is the actual female. That means that the professors who are being rated higher are actually women. Judged by their performance, these students see women as better teachers. Both the actual and perceived data is saying essentially the same thing, that in the particular factors tested here, women do better.

Does that mean that women make better professors? Maybe and maybe not. Look at the list of traits ranked. Traits that might actually be of value in professional training, such as strict, demanding, and holds to high standards. are not included. Instead, we have more soft and squishy traits such as helpful, praise, and respectful. What this research is really measuring is that women professors, whether actual or perceived, rank better at personality traits that many of us would assume to more likely be demonstrated by women rather than men.

In short, what this study illustrates, in defiance of what its researchers claim, is that women professors are better at displaying teaching traits that are traditionally regarded as more likely to be true of women. As to bias, it proves nothing, except perhaps that students like the softer, more helpful, and less demanding teaching style of women.

Keep in mind that my remarks are obvious to anyone who studies that chart. What does it say about the quality of thinking in academia that so few will note much less comment on that? All too often, today's academic thinking is driven by dogma and fear rather than the actual evidence.

Since there are only two professors here, doesn't the data just show that the professor who is an actual female/pretend male gets consistently better ratings than the actual male / female imposter professor?

There are so many things wrong with this study it's not worth thinking about.