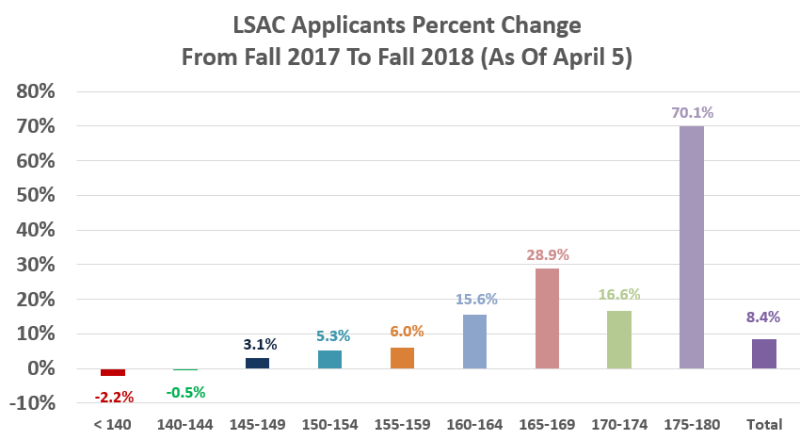 The rebound in law school applicants that the legal academy has long hoped for looks like it’s finally arrived.

“I know this is good news for all of us who had become concerned that some very talented students were choosing not to pursue legal education,” wrote council president Kellye Testy in a message to law school admissions personnel Thursday. ...

In an interview Friday, Testy said she has observed a renewed sense of respect for the law in her recent conversations with perspective law students.

“What candidates have said to me is, ‘For awhile, I thought going into tech was the way to go, but I don’t want to spend my life making gadgets. I want to do good,’” she said.

JM is on the money with his/her analysis and predictions, I think. $95k/year for a Harvard / Yale / Columbia tier law school is not justified by starting salaries at major law firms that doesn't even match the real dollar value of those firms' 2007 starting salaries, to say nothing of the radically diminished bonus schedules at those firms.

That’s weird, Steve, because I just checked the BLS lawyer page; it reads “more price competition over the next decade may lead law firms to rethink their project staffing in order to reduce costs to clients. Clients are expected to cut back on legal expenses by demanding less expensive rates and scrutinizing invoices. Work that was previously assigned to lawyers, such as document review, may now be given to paralegals and legal assistants. Also, some routine legal work may be outsourced to other, lower cost legal providers located overseas. Although law firms will continue to be among the largest employers of lawyers, many large corporations are increasing their in-house legal departments in order to cut costs… The federal government is likely to continue to need lawyers to prosecute or defend civil cases on behalf of the United States, prosecute criminal cases brought by the federal government, and collect money owed to the federal government. However, budgetary constraints at all levels of government, especially the federal level, will likely moderate employment growth…. Despite the projected growth in new jobs for lawyers, competition for jobs should continue to be strong because more students are graduating from law school each year than there are jobs available.”

Per the ABA employment stats, the number of FT/LT/license-required jobs has declined from 26k in 2011 to under 23k for 2016, even as the economy recovered and the employment reporting date got pushed back a month. So the market for new grads is shrinking, not growing. And in real dollars, the NALP median of $65,000 for the Class of 2016 is about $1,500 shy of the NALP median for the Class of… 1986.

This data is consistent with recent BLS data showing, yet again, an increase in lawyer incomes and employment numbers. But I do hope that students who choose law school over the tech sector are not averse to working on behalf of clients who make "gadgets."

I am really interested in that top scoring cohort. 680 applicants scoring 175 and up seems like an awful lot. What is the legal universe going to offer these candidates compared to their options in medicine or business? It won't be a cush job in academia, where only ~60 new TT hires are made annually and many of those are bottom tier schools or undesirable locations. There is always BIGLAW, but, assuming most of these candidates go to top 5 schools, the debt/salary proposition isn't all that attractive anymore. Furthermore, for this investment and all their hard work distinguishing themselves, they are going to end up with the same reward as some kid with a half-scholarship to Fordham that nudged his way into the top 25% of the first year class. It's like a 27th round draft pick in MLB getting the same signing bonus as a 1st rounder.

I think there is going to be a revolt. I think the top grads from top schools that pay full freight are going to push for starting salaries in the $250k range. The best firms in NYC, DC and LA will meet the demand. They will fill out hiring by making the Fordham kids non-partner track attorneys at around $90k per year. This trend will catch on, and it will be a calamity for schools outside the top 10 or so.

2. It may have been that in the past few years, those that scored high on the LSAT were not applying to law school at their historic rate.

The scores are scaled; what it means is that more high-scoring LSAT test-takers are actually going through with law school applications. Right in time for Congress to gut federal student loans for graduate students...

But, I thought that the scores on the LSAT (as for other standardized tests) were scaled. So that a given score was always the same percentile. Even if a higher percentage of "smarter people" were taking the test, wouldn't that still be shoehorned into the same scale?