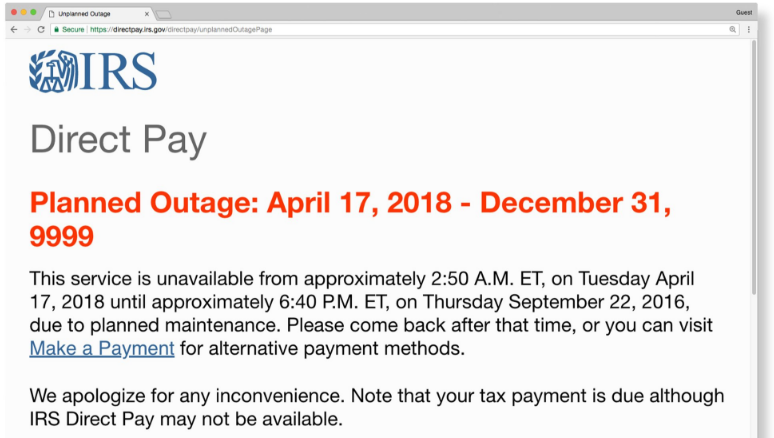 Millions of taxpayers who waited until Tuesday to file their 2017 tax returns and make payments through the Internal Revenue Service’s website were thwarted by a systemwide computer failure that advised last-minute filers to “come back on Dec. 31, 9999.”

The website malfunction, which began in the early hours of Tuesday morning and was not resolved until early evening, crippled a crucial part of the agency’s website that allows taxpayers to file returns electronically and make their tax payments directly through their bank accounts. The technology failure essentially brought the nation’s tax machinery to a halt on a day when millions of Americans were expected to file their tax returns, undermining the Trump administration’s plan to use Tax Day to promote its recent $1.5 trillion tax overhaul.

The I.R.S. said in a statement that taxpayers would be given an additional day to file their returns. ...

John Koskinen, the former I.R.S. commissioner who left the agency last year, said that the agency’s computer system had deteriorated after years of neglect and that it likely crashed as a result of increased strain ahead of the filing deadline. Last year, five million taxpayers filed on Tax Day.

“I kept telling Congress, if funding continues to be constrained, it’s not a matter of if, it’s a matter of when the system fails,” said Mr. Koskinen, who filed his taxes over the weekend. “You really are rolling the dice when you operate that way.”

AMTbuff: The IRS is involved in health insurance, not health care. There's a difference. And they shouldn't even be involved in that much...

Fortunately the IRS is not involved in anything involving life and death: for example, health care.