Fundamentalist U: Keeping The Faith In American Higher Education 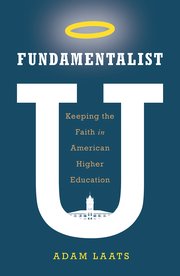 Colleges, universities, and seminaries do more than just transfer knowledge to students. They sell themselves as "experiences" that transform young people in unique ways. The conservative evangelical Protestant network of higher education has been no different. In the twentieth century, when higher education sometimes seemed to focus on sports, science, and social excess, conservative evangelical schools offered a compelling alternative. On their campuses, evangelicals debated what it meant to be a creationist, a Christian, a proper American, all within the bounds of Biblical revelation. Instead of encouraging greater personal freedom and deeper pluralist values, conservative evangelical schools thrived by imposing stricter rules on their students and faculty.

In Fundamentalist U, Adam Laats shows that these colleges have always been more than just schools; they have been vital intellectual citadels in America's culture wars. These unique institutions have defined what it has meant to be an evangelical and have reshaped the landscape of American higher education.

Students at these schools have been expected to learn what it means to be an educated evangelical in a secularizing society. This book asks new questions about that formative process. How have conservative evangelicals hoped to use higher education to instill a uniquely evangelical identity? How has this identity supported the continuing influence of a dissenting body of knowledge? In what ways has it been tied to cultural notions of proper race relations and proper relations between the sexes? And perhaps most important, how have students responded to schools' attempts to cultivate these vital notions about their selves?

In order to understand either American higher education or American evangelicalism, we need to appreciate the role of this influential network of dissenting institutions. Only by making sense of these schools can we make sense of America's continuing culture wars.

Inside Higher Ed, Fundamentalist U:

Q: Many colleges and universities talk about wanting to produce graduates with certain values (service to community, a commitment to critical thinking, understanding of diversity, for example). How do you see evangelical colleges as being different in their perceptions of their role and mission?

A: In one sense, the institutions in my book — a network of interdenominational evangelical colleges and universities that first came together in the fundamentalist movement of the 1920s — has some huge advantages when it comes to teaching students how to live moral lives. Unlike many mainline and secular schools, evangelical colleges have never doubted that moral instruction was their primary purpose. To that end, evangelical schools have always insisted first and foremost on maintaining strict rules on student behavior.

In another sense, however, evangelical colleges have been in a bind when it comes to student morality. Having promised to base their student rules on eternal religious truths, it has been extremely difficult for schools to change those rules. Yet the rules must change from time to time. These days, colleges such as Wheaton College in Illinois are struggling to figure out their moral mission when it comes to student gender and sexual identity. In the 1960s, Wheaton struggled to change its rules about white racism and segregation. In the 1920s, Wheaton struggled to figure out how to keep students from attending movies. The issues change from time to time, but the tension remains: all evangelical colleges insist that their strict student rules are derived from eternal, universal truths. Yet all schools have to change those rules from generation to generation.

Q: Many of the leading (by prestige) institutions in private higher education started with religious traditions that have now been largely abandoned. Do you see evangelical colleges today taking steps to assure that their religious identities do not fade away?

A: In all the archives I visited, this was the most pressing question in all the letters I read, in all the editorials and whisper campaigns and snarky gossip among evangelical intellectuals: Is College X or Y still “true”? A primary goal of the fundamentalist movement of the 1920s was to find a way to save higher education from the slippery slopes that had — according to the fundamentalists — destroyed evangelical schools in the late 1800s.

Since the 1920s, conservative evangelical intellectuals and college administrators have spent considerable resources to both remain true to their religious identity and to prove beyond any doubt to the wider evangelical community that they did so. This was more than a quirk; it was an institutional life-or-death issue. As more and more evangelical colleges and universities opened their doors in the second half of the 20th century, any rumor that a college had watered down its commitment to evangelical orthodoxy could spell the end of enrollments. Students would simply go elsewhere.

Different institutions handled this challenge in different ways. Some — such as Bob Jones College (now Bob Jones University) and Bryan University (now Bryan College) — put “never-change” clauses in their founding charters. It seemed like a simple solution in the 1920s, but it has led schools like Bryan into trouble recently, when they’ve tried to tighten up their rules to remain competitive.

"Adam Laats's history of the development of evangelical and fundamentalist higher education reveals a complex interaction between religious and academic values. The colleges, universities, and Bible Institutes that he examines contained deep differences regarding both spheres. As a sympathetic observer and an objective reporter, Laats captures the conflicts and the abiding strengths of faith-based institutions as they wrestle with the challenges of modernity and their own internecine quarrels."—Roger L. Geiger, author of The History of American Higher Education: Culture and Learning from the Founding to World War II

"Fundamentalist and conservative evangelical colleges face unique tensions. They represent volatile movements plagued by internal struggles and ever-shifting boundaries. They pursue higher learning on behalf of a movement that accused America's universities of betraying God's truth and righteousness. And they function as halfway houses for evangelical students who are called to be in the world, but not of it. Adam Laats went deep into the archives of Bob Jones University, Wheaton College, Moody Bible Institute, Biola University, Liberty University and Gordon College, and he tells their stories with great integrity. The result is a major contribution to the history of Christian higher education and to the understanding of fundamentalism and evangelicalism in America."—Joel Carpenter, Director of the Nagel Institute for the Study of World Christianity, Calvin College

"Adam Laats's nuanced, detailed, and exceptionally well researched history of twentieth-century conservative Protestant higher education offers a plethora of fascinating information and perceptive insights. It is essential reading even for those well versed in American evangelical history, because it offers a fresh analysis of the complex ways in which fundamentalist colleges reflected (and shaped) their religious movement's tenuous balance between the demands of the world and the tenets of faith."—Daniel K. Williams, author of God's Own Party: The Making of the Christian Right

"Laat's book is a valuable resource for those interested in the history of education or conservative Christianity."—Library Journal