Fair Shot:  Rethinking Inequality And How We Earn 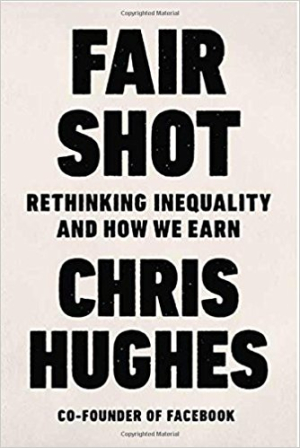 New York Times Book Review, Chris Hughes Made Millions at Facebook. Now He Has a Plan to End Poverty. (reviewing Fair Shot: Rethinking Inequality and How We Earn (2018)):

Chris Hughes, as he will be the first to tell you, has too much money. As he relates in his new book, “Fair Shot,” he co-founded Facebook, asked his roommate Mark Zuckerberg for 10 percent of the company, received 2 percent instead and became dynastically wealthy as a result.

Hughes is acutely aware of how unfair this is. “Most Americans cannot find $400 in the case of an emergency,” he writes, “yet I was able to make half a billion dollars for three years of work.” He’s also aware that the flip side of people like himself having too much money is that tens of millions of Americans have too little. Over 40 million Americans live below the poverty line, including one in five children under the age of 6.

There is a simple solution to the problem of people having too little money: giving them some. As Hughes efficiently and compellingly recounts, the proven and far-reaching effects of cash grants include more work; higher incomes; better performance in school and college; less tobacco and alcohol use; and fewer hospitalizations, illnesses and untimely deaths. In short, grants strengthen and empower the poor, making them much more economically and socially productive.

“Fair Shot” is a short, easily digestible elaboration of this argument, with a very specific proposal for taking from the rich and giving to the poor. At the top end, Hughes wants to raise the marginal tax rate for those earning more than $250,000 per year to 50 percent, both for earned income and for capital gains. At the bottom end, he wants to give a monthly $500 check to (nearly) all adults living in one of the 42 million households making less than $50,000 per year. The resulting America wouldn’t just be healthier and better educated; it would be richer, too, with the economy growing as much as a full percentage point faster than it would without such an intervention. The plan would also, by Hughes’s calculations, “lift 20 million people out of poverty overnight.” ...

Hughes’s proposal — which he himself describes as a “prosaic and incremental” expansion of the earned-income tax credit — is emphatically not a universal basic income. For one thing, it targets only the bottom 35 percent or so of earners in the country. Worse, it doesn’t even reach all of them. The Hughes plan is restricted to working Americans: people who made more than $6,000 last year, who are looking after dependents under the age of 6 or over the age of 70, or who are enrolled in an accredited college. If you earned less than $6,000, you’ll receive only your previous year’s earnings — and if those earnings were zero, you’ll receive zero. Those who live at the very bottom of the income spectrum would have to continue to rely on America’s overstretched social safety net, which, in all too many cases, pays them little or nothing.

By creating a hard ceiling at $50,000 a year, Hughes also creates a nasty marriage penalty: He’s effectively telling couples where each partner earns less than $50,000 that they shouldn’t get married and form a household. That’s because, if they do so, thereby bringing their joint earnings above $50,000, they’ll lose a combined $12,000 a year in guaranteed income.

Hughes quotes Daniel Patrick Moynihan, the architect of a previous attempt at a national guaranteed income, as saying that it failed because it was “both too much and too little; too radical, too reactionary; too comprehensive, not comprehensive enough.” Yet his plan seems to make exactly the same mistake. Opponents of no-strings cash handouts will not be particularly mollified by the fact that this plan targets merely 42 million households rather than all 120 million households in the country. Proponents of a universal basic income, meanwhile, especially those who see it as insurance for a time when robots drive us all out of work, will be exasperated at the way the plan explicitly excludes the jobless and the neediest.

Hughes is attracted to boldness, and played an important part in the achievements of both Mark Zuckerberg and Barack Obama. But ultimately he’s a better follower than a leader. Fired up by his new cause, he could have published a rallying cry, an inspirational manifesto. Instead, he has delivered a book with more footnotes than passion — and, for the very poorest, a proposal that seems deeply unfair.

Love the idea. I think Mr. Hughes should give away all his money. As for me? I’m hanging onto mine.