Today, we’re looking at what’s dubbed the “ultimate bar pass rate.” For the first time, the ABA has released the information, which is the percentage of a school’s graduates who passed the bar within two years of graduation. Unlike first-time bar pass rate, the ultimate pass rate captures graduates who may have failed the exam on their initial attempt, but passed on their second or third tries. Nationwide, nearly 88 percent of 2015 grads passed the exam within two years. Baylor University School of Law posted the highest ultimate bar pass rate—all 109 of its bar takers passed in that time period. 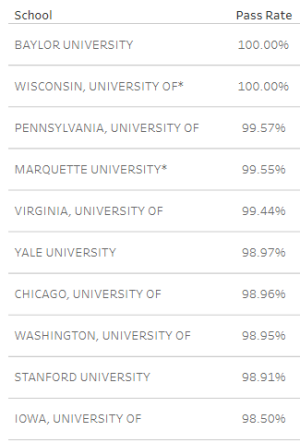 The University of Detroit Mercy School of Law had the lowest ultimate bar pass rate in 2015, at just under 57 percent.

But not every law graduate takes the bar. The chart also shows which schools had the highest percentage of graduates who didn’t take the exam within two years. One-third of 2015 graduates from Southern University Law Center didn’t take the bar—the most of any school, according to the ABA data. 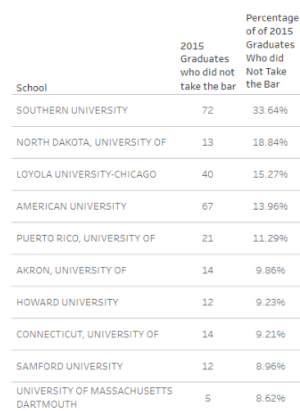 Finally, we break down which law schools seem to have a hard time figuring out how their graduates fared on the all-important licensing exam. We’ve listed the schools according to the percentage of their 2015 class for which they reported no bar pass information to the ABA. Detroit Mercy is tops in this category, with data missing for 24 percent of that class. 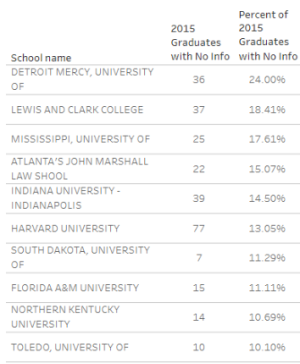 My comment addresses two matters about Detroit Mercy Law: first our low bar pass rate for the graduating class of 2015 and second, the high percentage of graduates "with no info."