Why Is It So Hard For Democracies To Deal With Inequality?

New York Times op-ed:  Why Is It So Hard for Democracy to Deal With Inequality?, by Thomas B. Edsall:

In theory, in a democracy, the majority should influence — some would even say determine — the distribution of income. In practice, this is not the case.

Over the past few decades, political scientists have advanced a broad range of arguments to explain why democracy has failed to stem the growth of inequality.

Most recently, Thomas Piketty, a French economist who is the author of “Capital in the Twenty-First Century,” has come up with a straightforward answer: Traditional parties of the left no longer represent the working and lower middle classes.

In a recent Power Point presentation, “Brahmin Left vs Merchant Right,” Piketty documents how the domination of the Democratic Party here (and of socialist parties in France) by voters without college or university degrees came to an end over the period from 1948 to 2017. Both parties are now led by highly educated voters whose interests are markedly different from those in the working class.

The result, Piketty argues, is a political system that pits two top-down coalitions against each other. ...

The Piketty report is a significant contribution to the growing collection of studies analyzing the inability of democratic forces to adequately counter inequality.

Five years ago, for example, Adam Bonica, a political scientist at Stanford, published “Why Hasn’t Democracy Slowed Rising Inequality?” Economic theory, he wrote, holds that “inequality should be at least partially self-correcting in a democracy” as “increased inequality leads the median voter to demand more redistribution.”

Starting in the 1970s, this rebalancing mechanism failed to work, and the divide between the rich and the rest of us began to grow, Bonica, Nolan McCarty of Princeton, Keith T. Poole of the University of Georgia, and Howard Rosenthal of N.Y.U. wrote.

First, growing bipartisan acceptance of the tenets of free market capitalism. Second, immigration and low turnout among the poor resulting in an increasingly affluent median voter. Third, “rising real income and wealth has made a larger fraction of the population less attracted to turning to government for social insurance.” Fourth, the rich escalated their use of money to influence policy through campaign contributions, lobbying and other mechanisms. And finally, the political process has been distorted by polarization and gerrymandering in ways that “reduce the accountability of elected officials to the majority.”

The accompanying chart shows that the share of contributions donated by the top 0.01 percent of the voting age population grew from 16 percent in the 1980s to 40 percent in 2016. 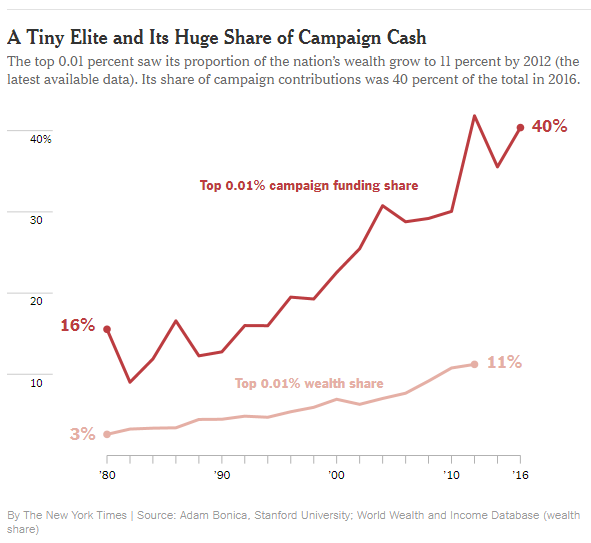 In other words, if money buys influence over policy, the top 0.01 percent bought nearly triple the influence in 2016 that it purchased in the early 1980s.

Daron Acemoglu, an economist at M.I.T. who has stressed the power of economic elites to set the policy agenda, voiced some skepticism of Piketty’s analysis. In an email, he wrote that what Piketty found can be explained in large part by racial hostility, the adverse effects of globalization on white manufacturing workers, and the decline in social mobility. ...

Dean Baker, a co-founder of the liberal Center for Economic and Policy Research, was the sharpest critic of Piketty among those I contacted. ... Baker argues that correcting inequality requires adoption of a much broader policy agenda. ...

From 1988 to 2012, the inflation-adjusted income of college graduates increased by 16 percent and for those with advanced degrees by 42 percent. 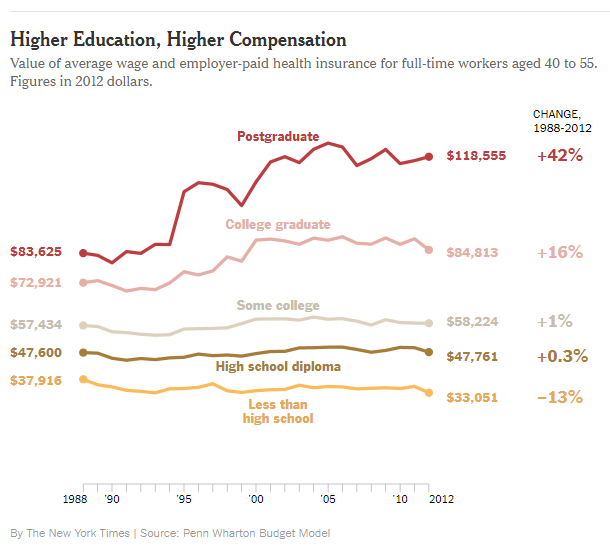 In theory, in a democracy, the majority should influence — some would even say determine — the distribution of income.