Had Cris Collinsworth Followed His Original Post-NFL Plan To Be A Tax Lawyer, He Would Be Poring Over The New Tax Law Today Rather Than Calling The Super Bowl 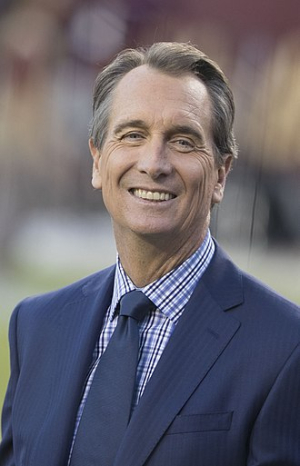 If his life had unfolded as he planned, Cris Collinsworth wouldn’t be spending this week in the Twin Cities, studying video of the Patriots and Eagles. He’d be in an office, poring over the details of the new U.S. tax code.

The former Bengals receiver began attending law school while still playing in Cincinnati [J.D. 1991, University of Cincinnati College of Law]. Armed with an accounting degree — and an affinity for business and tax law — Collinsworth saw his future in the legal world, even after a radio station asked him to be a fill-in host. ...

As he clicked off the list — Eagles quarterback Nick Foles’ comeback! LeGarrette Blount and Chris Long winning rings with the Patriots last year, now playing for Philly! — Collinsworth’s voice bloomed with excitement, in a way it probably wouldn’t have if he were discussing tax law.

“Believe me, I’m not longing for the days when I was going to become a lawyer,’’ he said, laughing. “Especially come tax time.’’

“[Broadcasting] seemed like a good go-between, a way to make a little money while I was finishing school,’’ he said. “But somehow, I’m still doing it.’’