In October 2015 and February 2016, I posted blogs discussing attrition rates between 2010 and 2014, and 2010 and 2015, respectively. With the release of the 2017 Standard 509 reports in December, I now have compiled attrition data from all of the fully-accredited ABA law schools outside of Puerto Rico for the last seven years, through 2016-17. I have calculated average attrition rates for the class as a whole and then broken out average attrition rates by law schools in different median LSAT categories – 160+, 155-159, 150-154 and <150. (Earlier this month, Brian Tamanaha noted that there are 14 law schools that have non-transfer attrition rates in the 2016-17 academic year in excess of 20%, the threshold set forth in Interpretation 501-3 which the Council for the Section of Legal Education and Admissions to the Bar adopted early in 2017.)

The following chart shows that despite the declining “LSAT profile” of the entering classes between 2010 and 2014, there had not been any meaningful change in the average “academic attrition” rate for first-year students through the 2013-14 academic year. In 2014-15, however academic attrition increased modestly to 4.15% and then again in 2015-16 to 4.28%. Given that there was a corresponding decline in “other attrition” in 2014-15 (for the first time in four-years), at least some portion of the increase in “academic attrition” would appear to be attributable to the redefinition of “academic attrition” described in the preceding paragraph.

When looking at this data, some things are worth noting.

2B. The Top Three Categories of Law Schools Saw Decreases in Academic Attrition Over Time 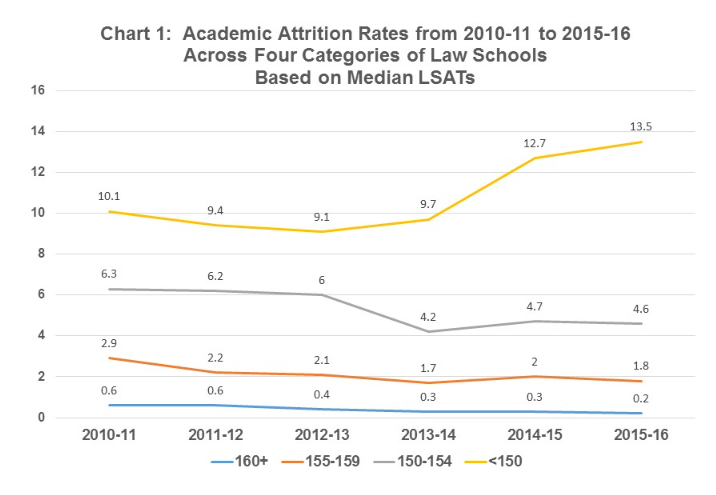 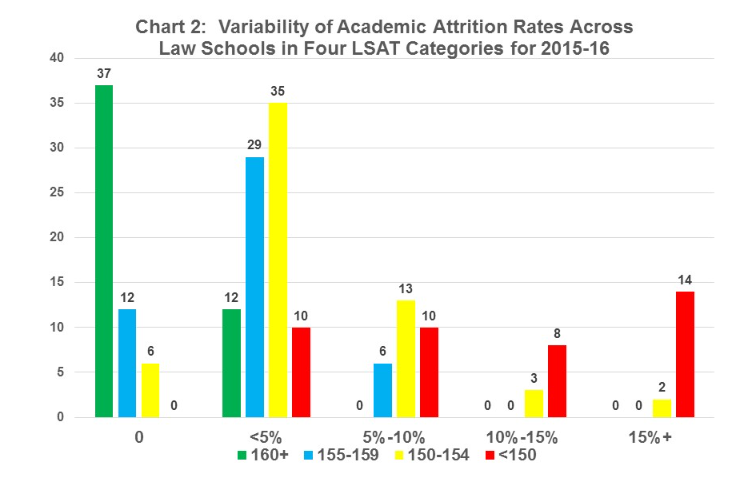 This phenomenon of much greater variability in academic attrition rates among law schools with a median LSAT of less than 155 may merit further attention. For law schools with a similar 50th percentile LSAT and 25th percentile LSAT for their entering classes, what can explain a range of academic attrition from 1% or 2% to nearly 20% or more? Does one school have a much higher standard for academic good standing and dismissal? Does one school have a much more robust academic support program? Have the professors at one school failed to adjust their grading to reflect a significantly different entering class profile among their students?

Akil bello - This blog posting essentially is the research report. It is based on data compiled by the ABA which is available at http://www.abarequireddisclosures.org/. I have not done this with respect to the UGPA profiles of law schools, but my guess is that it would track pretty similarly in that there would be little attrition among law schools with high median UGPAs and increasing attrition as median UGPA decreases.

Is there a full research report I can look at? Have you done this analysis with GPA vs attrition ?