The Key To Success Is Not Talent Or Hard Work, But Instead Pruning Your Tasks And Excelling In What's Left On Your Plate 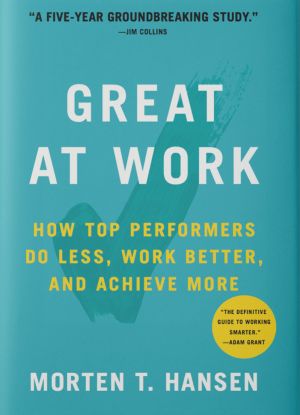 Talent and hard work are important, but most top performers in business have one thing in common: they accept fewer tasks and then obsess over getting them right.

Most Americans work impossibly hard. We put in long hours and maximum effort, but better performance often eludes us. ...

The knee-jerk answer to what distinguishes great performers from others is simple: talent. Social scientists and management experts explain performance at work by pointing to people’s innate gifts and natural strengths. How often have you heard phrases such as “She’s a natural at sales” or “He’s a brilliant engineer”? These talent-based explanations deeply influence our perceptions of what makes for success.

Are they right? Some experts say no, arguing that an individual’s sustained effort is just as critical as talent or even more so in determining success. According to this view, people perform well because they work hard and put in long hours. They end up doing more, taking on many assignments and running to lots of meetings.

But neither of these arguments ... explain[ed] the performance differences I had observed between equally hardworking and talented people.

In 2011, I decided to try to answer the question of why some people outperform others. I recruited a team of researchers with expertise in statistical analysis and began generating a set of hypotheses about which specific behaviors lead to high performance. We then conducted a five-year survey of 5,000 managers and employees, including sales reps, lawyers, actuaries, brokers, medical doctors, software programmers, engineers, store managers, plant foremen, nurses and even a Las Vegas casino dealer.

The common practice we found among the highest-ranked performers in our study wasn’t at all what we expected. It wasn’t a better ability to organize or delegate. Instead, top performers mastered selectivity. Whenever they could, they carefully selected which priorities, tasks, meetings, customers, ideas or steps to undertake and which to let go. They then applied intense, targeted effort on those few priorities in order to excel. We found that just a few key work practices related to such selectivity accounted for two-thirds of the variation in performance among our subjects. Talent, effort and luck undoubtedly mattered as well, but not nearly as much.

The research makes clear that we should change our individual work habits if we wish to perform better, but the implications are much more far-reaching. We also need to change how we manage and reward work, how we measure economic productivity and perhaps most important, how our culture recognizes hard work. We should no longer take it as an automatic compliment to hear that we’re “hard working.” Hard work isn’t always the best work. The key is to work smarter.

How did the best performers in our study do this? Rather than simply piling on more hours, tasks or assignments, they cut back. They unknowingly applied a dictum invented 700 years ago by William of Ockham, a European friar, philosopher and theologian. Ockham is famous for a principle that came to be called (in a Latinized spelling of his name) Occam’s razor. It stipulates that the best explanation in matters of philosophy, science and other areas is usually the simplest one.

At work, this principle means that we should seek the simplest solutions—that is, the fewest steps in a process, fewest meetings, fewest metrics, fewest goals and so on, while retaining what is truly necessary to do a great job. I usually put it this way: As few as you can, as many as you must. The French writer Antoine de Saint-Exupéry neatly formulated the same idea in his memoir: “Perfection is finally attained not when there is no longer anything to add, but when there is no longer anything to take away.”

Sometimes “the fewest” means just one. I used to labor through too many slides in my presentations. More, I thought, was better. Then, before a meeting I had with the CEO of a large European company, I was asked to present a proposal for executive education in just one slide. “One slide?” I asked in disbelief. I labored to reduce my 15 slides to four, and then to shrink them down some more. After some struggle, I thought, “What is the key issue here?” Applying Occam’s razor, I discarded all of my slides except one: a color-coded, hourly calendar of our program that I obsessed over to get just right. When you present one slide, it needs to be excellent.

And it worked. Since I didn’t have to take the time to present 15 slides, the CEO and I were able to spend our 45 minutes discussing the program in greater depth. When we finished, he remarked on how productive the meeting had been.

Once you’ve cut the clutter in an attempt to be more selective, it’s tempting to add new items back in, often in response to outside pressures. In our study, a full 24% of people blamed their inability to focus on bosses who set too many priorities. The top performers we studied combated this by following a second key practice: They said no to their bosses.

Of course, how you say no makes all the difference. The most astute performers explain that their overriding goal is to deliver great work. They are prioritizing, they say, not to slack off but to go all out and excel in a few key areas. ...

How to add value? Our study found that people sometimes do it by simply changing something to help colleagues do their work better, downstream or upstream. ... Attending to what’s valuable often highlights ways to redesign work to make it smarter.

One useful way to simplify work is to confront a “pain point,” a thorny problem plaguing a set of people. ...

So much in our workplaces is premised on the conventional wisdom that hard work is the road to success, and that working the hardest makes you a star. Our analysis suggests the opposite. Yes, the best performers work hard (about 50 hours a week in our data, like Natalie), but they don’t outperform because they work longer hours. They outperform because they have the courage to cut back and simplify when others pile on, to say “no” when others say “yes,” to pursue value when others just meet internal goals, and to change how they do their jobs when others stick with the status quo. They’re innovators of work.

So Nancy Reagan was right (in a way): avoid meetings and "just say no" to committee assignments