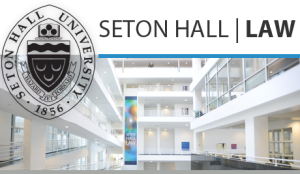 After my column, I learned that for the 2017 entering class Seton Hall had changed the structure of their part-time program from an evening program to a weekend program. ...

The change was prompted, in significant part, by concerns by the faculty and school leadership over the significantly weaker credentials, and the significantly weaker performance (higher attrition rate, lower bar passage rate) of the part-time students.   Also, according to Seton Hall Dean Kathleen Boozang, the part-time program was no longer serving very well the school’s intended mission of providing an opportunity for working adults to attend law school.  Many of the part-time students were recent college graduates who were just taking fewer credits and working part-time, as opposed to older students with full-time jobs seeking to make a career change.

The result of changing to a weekend program not only attracted far more of the kind of students that the school was looking for — working adults seeking a career change — but also resulted in far stronger candidates.  The entering class profile for the 2017 part-time division was quite impressive: 158/156/152  3.61/3.28/3.06.  The LSAT profile was identical to the full-time entering class, with GPAs just slightly lower, about .10.  And they even managed to grow the class from 37 in 2016 to 43 in 2017. ...

I applaud Dean Boozang and Seton Hall for taking a risk and adopting this innovative approach.  Unfortunately, just when the ABA needs to be paying more attention to this issue, the ABA stopped requiring law schools to differentiate their admissions data, so it is no longer possible to compare the admissions profiles of the part-time and full-time entering classes, and law schools may be able to hide the weak numbers for their part-time students. But if a law school could grow its part-time class, while increasing the quality of its students, thereby also decreasing its attrition rate and increasing its bar passage rate, the school would be foolish not to consider doing so.  Especially in major metropolitan areas where there are several law schools competing for evening students, law schools that are having difficulty attracting a sufficient number of well-qualified applicants for their part-time evening program  should consider changing to a weekend program.

See also Weekend Warrior, Top 3 Reasons Why Studying Law Part Time on the Weekend is the Best Thing that Makes Me Want to Die Inside

So after taking a swipe at a school when he didn't have the info, David Frakt now applauds them. Somewhere in between there should probably be an apology.