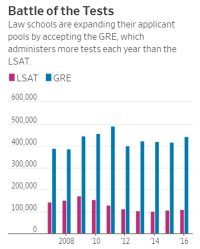 This year, you can get into a top law school without taking the LSAT.

Some of the nation’s law schools — including at Harvard and Georgetown — are letting applicants take the Graduate Record Examination instead of the Law School Admission Test. The schools say they are changing in part to attract students from a wider variety of backgrounds, particularly with science, engineering and math experience.

Both tests, of course, are tough, but the LSAT holds a particular place as a grueling rite of passage. The GRE relies more on knowledge that can be memorized, as college-entrance tests do, than the skills-based LSAT that test-prep instructors say is like learning how to play a sport or instrument.

The legal industry is notoriously slow to change. Some lawyers predict the broadening acceptance of the GRE, which is used for admission to a range of programs — from masters’ in engineering and Ph.D.s in philosophy to M. B. A.s — will lead to law students who aren’t committed. Others say schools are accepting the test to game closely-followed law-school rankings that take average LSAT scores into consideration, or to keep tuition income flowing.

“I remain deeply cynical and skeptical of the whole thing,” said Sarah Zearfoss, dean of admissions at University of Michigan Law School, which requires the LSAT. “You can ruin someone’s life by admitting them if they’re not qualified.” ...

At least 14 law schools of the nation’s roughly 200 offer applicants the option of using GRE scores instead of the LSAT, or plan to do so next year. They include BYU Law School, Columbia Law School, George Washington University Law School, Northwestern Pritzker School of Law and Texas A&M University School of Law. A few others accept the test for limited purposes, such as for applicants to dual degrees. ...

The most vocal dissenter so far has been the Law School Admission Council, the nonprofit organization that administers the traditional law-school exam.

“The LSAT is designed for legal education,” said Kellye Testy, LSAC’s president and a former law-school dean. “It actually is marked to the kinds of skills students need to succeed.”

Ms. Testy said that she is fine with limited use of the GRE, but that substituting it completely for the LSAT would be troubling. She said that is in part because any significant drop in LSAC’s $60 million annual revenue, which comes largely from testing fees, could impact programs the organization funds to help keep a diverse student population entering the legal profession.

The American Bar Association’s accrediting arm is considering no longer requiring any admissions test at all. A final decision won’t be made until mid-next year at the earliest.