Republican lawmakers hope to reach compromise this week on a tax overhaul, with final votes in the House and Senate next week and delivery to President Donald Trump’s desk before Christmas. The new rules could take effect in January, encouraging business owners to move quickly to take advantage of them.

The core of the plan is a vast reordering of U.S. business taxation, not only for big corporations like Apple Inc. and Walmart Stores Inc. but also for millions of partnerships, limited-liability companies and other so-called pass-through companies that pay tax through individual rather than corporate returns.

The tax bill would lower corporate tax rates to near 20% from 35% while leaving top individual rates just below 40%. It would also create a new system for pass-through firms that would exist in a gray area—part business and part individual. The Senate and House both want to lower these entities’ taxes, too, but have different ways of doing it. 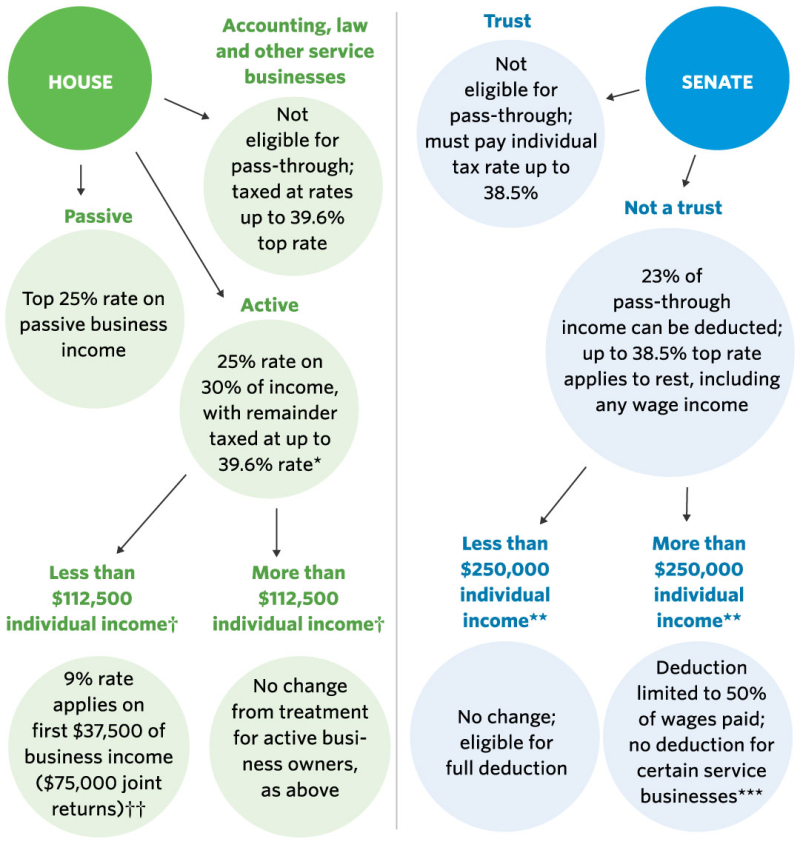 The new pecking order of business and individual taxation could lead to a new era of business reorganization and tax-code gamesmanship with unknown consequences for the economy and federal revenue collection. ...

“There are going to be a lot of people looking into what they can do for themselves,” said Daniel Shaviro, a New York University law professor. He and 12 other lawyers outlined in a paper last week potential tax-avoidance steps businesses could take under a new law. It has been downloaded more than 20,000 times.

Any new rules are likely to take effect Jan. 1 with little formal guidance from the Treasury Department and Internal Revenue Service on how they would be applied.

Tax advice that worked for decades is getting flipped on its head.

For years, business owners avoided traditional corporate classification because it meant a second layer of dividend taxes up to 23.8%. Low individual rates made the pass-through structure attractive, especially after 1986, when top rates were cut to 28% before climbing to today’s 39.6%.

Now, with a prospective corporate rate at or near 20%, some pass-through businesses are considering reorganizing to take advantage of that low rate.

Who knew the Republicans loved tax lawyers so much.

“The new pecking order of business and individual taxation could lead to a new era of . . . tax-code gamesmanship with unknown consequences for the economy and federal revenue collection.” Could? Did you write “could?” Surely you jest. This WILL lead to a new era of tax shelters, business dislocation, tax avoidance and evasion, and predictable inefficiencies. This law is going to be the Tax Lawyers’ & CPAs’ Economic Relief Act of 2017.

Bad tax policy, but a bonanza for transactional tax lawyers.