The Most Underrated Law Schools In America 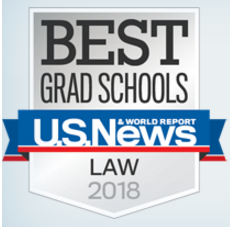 The Seven Most Underrated Law Schools:

Christopher Ryan of Vanderbilt University and Bryan Frye of the University of Kentucky conducted the analysis that will appear in a forthcoming issue of the Alabama Law Review.

Their premise is simple: Judge the quality of law schools based on where the most qualified students go. These candidates have the most at stake and gather a huge amount of information, so you can gauge school quality based on their choices.

Compared to their position in the U.S. News rankings, seven law schools made significant gains and placed in the Top 50 of the country's 204 law schools.

Rob Anderson asks whether a law school's LSAT and UGPA meadians are a leading indicator of its future U.S. News ranking:

[I]t may be that law students' choices are a "leading" indicator and the peer rankings are a "lagging" indicator of law school overall rankings. Still, the peer rankings appear to lead the lawyer/judge rankings, or at least not lag them. Although there are other potential interpretations of these relationships, identification of leading and lagging predictors could be significant. If this is true, then the revealed preference approach to law school rankings may predict the future US News overall rankings. Whether this suggests that increasing LSATs will cause increases in the peer and lawyers/judges rankings (with lags) is another question, but one whose answer could pay off for rankings-focused law schools.

Update:  Above the Law, What Are The Most Underrated Law Schools?:

[T]hese [seven] schools are the ones poised to make a charge up the USNWR rankings.

Thanks for posting. I am a proud graduate of Northeastern University School of Law. Both the education and educational philosophy appealed to me when I chose to attend and both have served me well over the course of my career. Thanks for posting Dean Caron.

C'mon, we all love, or love to hate UNE. Give him/her a break, he/she makes this fun. Don't change UNE.

It's all about, no, it's only about the LSAT and UGPA. That's what clients and judges look at, too, right?

The reasons why Northeastern's USNWR rank are so far below the incoming stats (which the school has managed to hold level the last several years via cutting enrollment drastically) are 1) the atypical grading system that earns much ire on the prestige-o-meter part of the rankings (and by employers!) and 2) the atrocious jobs outcomes. To be blunt, Northeastern Law is a school with LSAT/uGPA stats just a few hairs below BC/BU but with legal employment outcomes pretty consistent with open-enrollment Suffolk and New England Law Boston. For most of the years since 2011, it wasn't even cresting 50% full-time, long-term, license-required employment. One year (I believe 2012) it barely cleared 40%. And Biglaw employment has utterly collapsed since the recession, which is no minor thing given their COA.

Now that I think about it, a few years ago Prof Caron did an analysis ranking law school inputs (the USNWR academic selectivity number) and outputs (percentage of grads in FT/LT/license-required jobs, excluding school-funded jobs and shingle-hangers) and comparing the differences on those two lists. If memory serves, no school had a wider gap than Northeastern. In so many words, Northeastern takes students with pretty decent potential as based upon grades and LSAT scores and... falls a mile short in placing them into the legal profession as compared to every other law school in the nation with similar incoming uGPA/LSAT profiles.

Incidentally, the rankings are squishy enough around NU's level that the law school has bounced around a ~30 point spread over the years, from roughly the mid-60s to the mid-90s.

This is silly, indeed stupid. Student choices reflect strong geographic and related preferences--e.g., Mormons prefer BYU, everyone loves Malibu, and so on. Unless you could cleanse those preferences out, this is literally meaningless.

I keep waiting for him/her to update their status to "Employed Northeastern."

Unemployed Northeastern is going to love this