Enrollment in law school J.D. programs dipped a tad this year, but some unexpected good news provided a counterbalance.

As for first-year student enrollment—which schools closely watch since it has financial implications for the next three years—the ABA data released late Thursday shows the number of those students ticked up slightly for the second year in a row. There were 37,398 new first-year students in fall 2017, a gain of 291 students or 0.8 percent compared with last year. This year’s increase is small, but it’s still greater than the miniscule uptick last year, when only 36 additional first-year students enrolled compared to the previous year.

Any type of increase in the first-year class, however small, is a good thing compared with the alternative—those numbers plummeted by 29 percent between 2010 to 2016, forcing schools to lay off professors and make budget cuts.

Recovering some of that revenue could be why schools are seeking non-J.D. students. ...

Traditionally, many LL.M. students come from other countries, noted Derek Muller, who writes about enrollment trends on this blog, Excess of Democracy. He expected non-J.D. enrollment to drop because of unpredictable immigration and travel rules under the Trump administration. “Apparently, law schools are finding students—domestic or foreign—interested in these programs,” said Muller, a professor at Pepperdine University School of Law.

The non-J.D. program can bring in tuition-paying students who are not required to take the LSAT, and schools don’t have to report them to U.S. News & World Report for the annual law school rankings, added Muller. “There’s no question schools are looking to other programs to make up the revenue shortfall in J.D. programs,” he said. 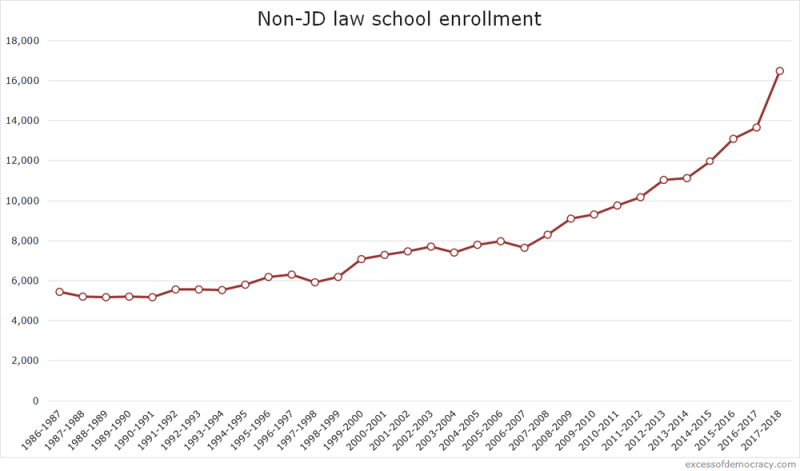