Fall 2018 Law School Admissions Season Opens With A Bang: Applicants Are Up 14.2% 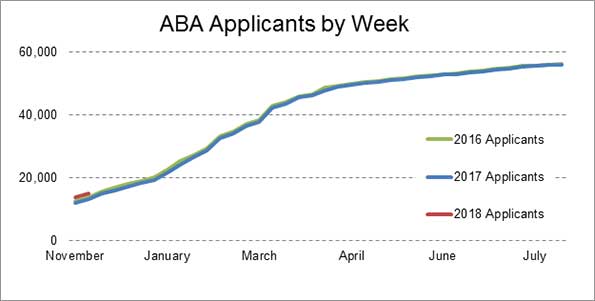 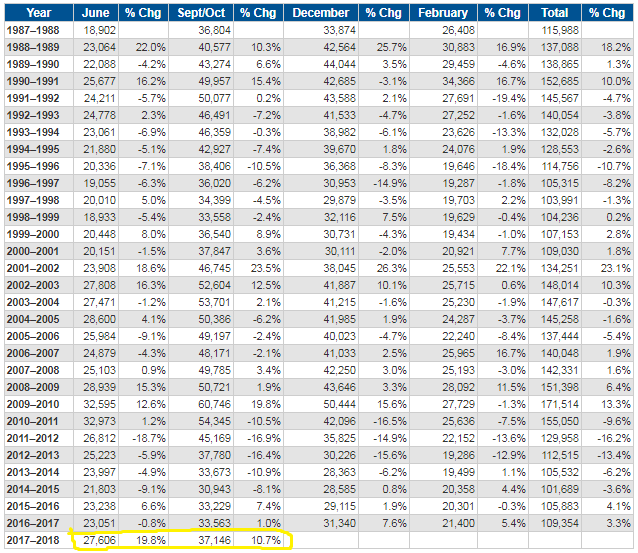 1) NALP only gets around 50% of law school grads' salary information and never includes the $0.00 salaries of the 9-10% of graduates who are unemployed when the data is taken, so your statement "here were 31,354 law school graduates employed in jobs with a median salary of $65,000" isn't strictly accurate.

3) Before you start crowing too much about increasing applications, maybe look at the chart some more; there are still fewer applicants than there were in the late 1980s.

4) Even if the Republican Congress eliminates PSLF, IBR, or caps GradPLUS, several studies have proven that law graduates will still earn a substantial wage premium over those with only a terminal bachelor’s degree.

Yeah, that historical data says nothing about whether future graduates of, say, Seton Hall can make four-figure after-tax student loan payments - for that is what law school loan repayment will look like absent IBR plans and GradPLUS - a few months after taking the bar exam and earning, if anything, something in the $40k to mid $50k range. Since that fellow wrote the study you are talking about while teaching at Seton Hall, let's limn out current data (as opposed to more favorable data from like 1997). Cost of attendance about $75,000 per year. With the median tuition discount (and only 74% received discounting), still $50,000/year. Median starting salary from Seton Hall per NALP: $51k (87% reporting rate). After interest and bar expenses, let's call the cost of Seton Hall for the student with the median discount $175k, excluding any undergrad debt. Standard repayment for $175k is $2,013. Takehome in New Jersey from $51k is almost exactly $40k, or $3,333 after taxes. So in this probable new world without GradPLUS or IBR plans, the median student at Seton Hall will face a student loan repayment that is 60% of his paycheck. That's with a freaking $25,000/year tuition discount! That is reality, and a hard sell.

don't forget, law is also a great way to train your mind to think. many people pursue a law degree not to be a lawyer, but for their regular occupation

Quality of applicants is way up too. Highest percentage increases are in the 160+ LSAT bands. I am sure that will be hailed as a great victory by law schools, but watch as these sophisticated applicants ruthlessly negotiate tuition discounts and ask pointed questions about job stats.

There is just no way smart 22 year olds pay $80k per year on COA to attend law schools were the average outcome is a job in a 1-10 atty office paying $60k with no benefits. But that is all the average law school has to offer. It will be very interesting to see what this class of applicants does.

Applicants are wising up that many of the claims about the legal market are false. According to NALP, last year there were 31,354 law school graduates employed in jobs with a median salary of $65,000. Once those graduates gain experience, their salaries will substantially increase. The BLS reports the median annual wage for lawyers is $118,160. Even attorneys working in local and state government are averaging $91,950 and $88,020 respectively. Even if the Republican Congress eliminates PSLF, IBR, or caps GradPLUS, several studies have proven that law graduates will still earn a substantial wage premium over those with only a terminal bachelor’s degree.

What could possibly go wrong? I'm sure that jobs for lawyers are surging too. What? They aren't? Ssshhhh.

Heh. And if the GOP has its way with the HEA authorization and 1) caps GradPLUS,* 2) eliminates PSLF, and 3) eliminates and/or lengthens other sundry income-based repayment plans, watch the number of matriculants plummet.

*They have not divulged limits yet but a few years ago Senator Lamar Alexander was pondering a $150k ceiling for grad students, which would barely pay for half of Harvard Law at sticker.

**I have variously seen calls to simply eliminate loan forgiveness for private sector workers - they can just stay on IBR until they work the balance off, if ever - and for the outright elimination of IBR plans for private-sector workers.