Bloomberg, Can Mitchonomics Fix the Broken Business of Higher Ed?:

Under [Mitch] Daniels, things have been generally cheery at Purdue. With return on investment increasingly important to students, given the price of attending and the corresponding debt, Purdue has something to sell: static costs and a good job if you graduate, especially in the science, technology, engineering, and math (STEM) fields. 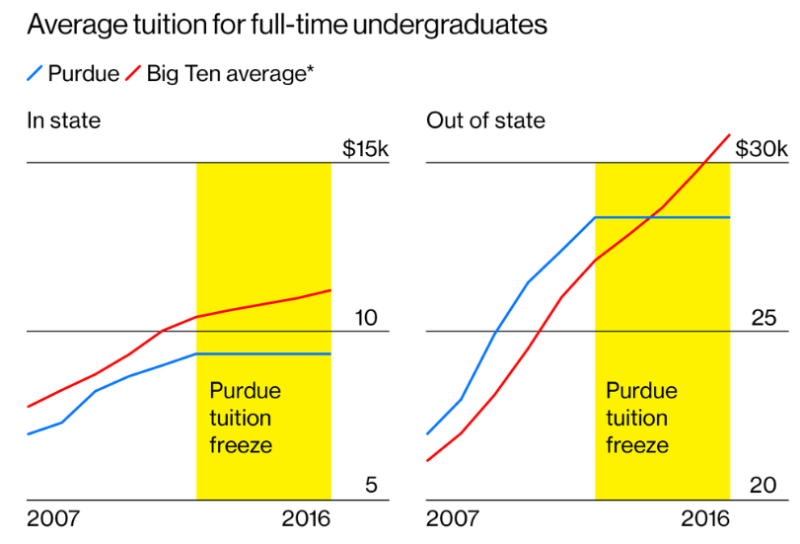 Since Daniels started in 2013, undergrad applications and enrollment have hit record levels, as have alumni donations, graduation rates, and the number of startups launched by researchers. Purdue has added 75 ­tenure-track positions in engineering and increased the number of students earning STEM degrees by 24 percent, with big gains among women (40 percent) and underrepresented minorities (65 percent). Daniels has rolled out initiatives that range from the audacious, such as ­interest-free financial aid in exchange for a percentage of future earnings, to the ­alcoholic: Boiler Gold, a craft beer that went on sale in West Lafayette this fall, is a collaboration among a local brewer, the university, and its food science department.

Daniels’s moves are driven by necessity. Founded in 1869, Purdue was part of a wave of public universities established after the Civil War that helped expand the middle class and propel the research advances that fueled the manufacturing boom in the 20th century. Today, tighter public spending means more schools are getting less state funding. Some, including the University of California at Berkeley, UCLA, Michigan, North Carolina, Texas, and Virginia, have replaced that loss with a combination of jacked-up tuition, even-more-jacked-up out-of-state tuition, successful sports programs, and donations from ­exuberant—and wealthy—alumni. Other large public universities, especially in the Midwest, have struggled to replace state funding cuts, making it tough to keep faculty from seeking higher salaries and bigger research budgets elsewhere. Professors at Midwestern public universities make about 30 percent less than their Northeastern counterparts.

To combat the budget slashing, Purdue’s competitors are raising tuition, room, and board, and enrolling more ­out-of-state and international students, who pay at least twice as much as in-state residents. The average cost of attending a Big Ten school is up 16 percent for in-state students since the 2010-11 school year, to more than $27,000 annually. ­Out-of-staters at the University of Minnesota are paying $36,383, about 33 percent more than they did in 2011. This hasn’t hurt ­enrollment—satellites and second-tier schools are the ones suffering, for now—but Daniels is betting it will, which is why Purdue is bending the cost curve downward.

Still, it hasn’t been a total love fest. In a controversial move, Purdue acquired Kaplan University, a predominantly online, for-profit institution that enrolls 33,000 students—60 percent of them older than 30. The venture, aimed at expanding Purdue’s online reach and known provisionally as NewU, has unnerved the faculty. Critics say that by working with a company that’s paid out millions in legal settlements for allegedly unscrupulous business practices, Daniels risks tarnishing Purdue’s brand. When he announced the deal in April, he was met with “stunned, stony silence,” says David Sanders, a biology professor and former chair of the University Senate. “If you mention the word ‘Kaplan,’ what you get is a head shake from virtually any faculty member on campus.”

With technology changing how people are educated, Daniels says, the acquisition is the kind of move a traditional university needs to make to survive. “In a sector that’s so slow to change, or even recognize the threats it’s facing,” he says, “you don’t have to move very far to be seen as different.” ...

In a January 2013 letter to trustees outlining his goals, Daniels wrote that Purdue would “reexamine current practices and expenditures with a determination to keep … tuition and fees within the reach of every qualified student.” After two months he announced that Purdue would freeze tuition and fees, for the first time in 36 years, at $9,992 in state and $28,804 out of state. The freeze has been extended five times, contributing to a 35 percent drop in per-student debt since 2012, from $5,700 to $3,707.

Daniels says that when he first broached the idea of a freeze, admissions officials warned him that doing so would suggest “we’ve lost confidence in our product.” But he argued that the spiraling cost of higher education was unsustainable. “I told people, ‘The market won’t stand for this, and at some point the public is going to start demanding that universities lower costs. So let’s not be last.’ ” Since 2013, undergrad applications are up 56 percent, and Daniels says the same admissions officers now say the tuition freeze gives them an advantage. Purdue has “fallen into the position that every marketer wants: differentiation,” he says, invoking his experience as an executive at pharmaceutical giant Eli Lilly & Co. in the 1990s. “When anybody talks about us, somewhere up front they mention that we’re the school that’s held tuition constant.”

To make up for reduced tuition revenue, Daniels—known as “the Blade” for his deficit-reduction zeal in the Bush White House—enlisted veterans of his gubernatorial administration to slash $8 million from the operating budget. “He’s trying to set a standard for how a university can be successful by being managed more efficiently,” says Robert Wynkoop, who worked under Daniels in the statehouse and serves as Purdue’s ­managing director for service enterprises in the office of the treasurer. Among other things, the team contracted with a charter bus service, saving $3 million, and scrapped plans to build a $22 million facility for food storage, instead hiring a local, private vendor for $325,000 annually. ...

The Kaplan merger has the biggest potential impact on enrollment. Daniels’s decision to pursue the deal stemmed from dispiriting polling results. A joint annual survey by Purdue and Gallup asks college graduates across the country how the quality of their education contributed to their career development and overall happiness. The survey’s initial results, in May 2014, showed that only 29 percent of respondents said their school prepared them well for life after graduation. More than 100 schools now participate in the survey.

Daniels laments the failure of America’s elite universities to adjust to technological change and growing concern about the value of a four-year degree. E-learning companies such as Udacity Inc. and Coursera Inc. have valuations approaching $1 billion, and ­nonprofits such as Khan Academy reach tens of millions of students monthly. “We’ve got to pass the ‘pajama test,’ ” he says. “There are a lot of people who think residential higher education is on borrowed time. There are a lot of smart people, backed by a lot of big money, using dazzling technologies, who are saying to prospective students, ‘Why would you pick up and move somewhere and pay rent for four years when I can bring the best education available to you while you sit in your pajamas?’ ”

When speaking to campus audiences, Daniels cites Joseph Schumpeter, the Austrian economist who pioneered the concept of “creative destruction.” The history of business, Daniels says, shows “it’s impossible for the incumbent to adjust fast enough to ward off the disrupters, in part because what you’re doing has worked for such a long period of time. So we’re in a race.”

The best way for Purdue to ward off the challenge posed by online universities, Daniels decided, was to buy one. ...

To skeptics, the venture will undermine the university’s reputation and alter Purdue’s ­character by elevating the profit motive. The University Senate has refused to endorse the deal, and more than 300 faculty members signed a petition in November urging the Higher Learning Commission, Purdue’s regional accreditor, to block it. “The faculty is overwhelmingly opposed to it,” says Sanders, the former chair of Purdue’s faculty senate. “The purpose of Purdue is learning, research, and engagement. The purpose of Kaplan is to make money.”

Daniels acknowledges that “any novel idea will generate concerns and opposition,” adding, “I wish people took a little time to understand it.” He predicts that Purdue professors eventually could supplement their salary by teaching online courses for NewU. But he admits the benefits to traditional faculty members are theoretical, what he and his aides call “Wagners”: wild-ass guesses not easily refuted.