WSJ: The Rise And Fall Of A Law School Empire Fueled By $1 Billion Of Federal Loans 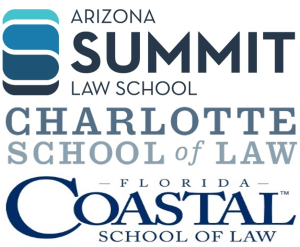 Wall Street Journal, The Rise and Fall of a Law-School Empire Fueled by Federal Loans:

Don Lively had a plan to bring more blacks and Hispanics into the practice of law.

Mr. Lively, a professor who is white, set out to open a law school that would take minority students even if they had low test scores or did poorly in college. Using retirement savings, a loan from his father and a check from a retired couple who read about him in a local newspaper, he opened Florida Coastal School of Law in 1996 in Jacksonville.

That school and two others he later helped run — Arizona Summit in Phoenix and Charlotte School of Law in North Carolina — became among the fastest-growing law schools in the country. Half of their students were from minority groups. The for-profit schools became part of a business network called the InfiLaw System, backed by Chicago private-equity investors. Enrollment soared from several dozen at Florida Coastal in 1996 to roughly 4,000 at the three schools combined in 2012.

Now, two decades after it all started, Mr. Lively’s mission is in tatters. The Charlotte school closed in August after North Carolina revoked its license. Enrollment in Arizona and Florida is down sharply, and InfiLaw is looking for buyers for both schools. Thousands of InfiLaw students have dropped out, transferred or failed state bar exams and are struggling to pay down a total of more than $1 billion in federal student loans, Education Department and American Bar Association data indicate. Many owe more than $100,000.

“The whole system broke down,” says Mr. Lively, 69 years old, who serves as Arizona Summit’s president and owns less than 1% of InfiLaw. “We weren’t ready to deliver on a scaled basis. We haven’t built up our academic support program to a level that would enable us to deliver those things that we were convinced that we could deliver.”

Federal student loans were central to the venture’s wild growth. Taxpayers could wind up on the hook for large chunks of InfiLaw student debt that never gets paid back, and the student borrowers face years of damaged credit.

Heavy borrowing by students at for-profit schools such as InfiLaw has contributed to a rapid expansion in student debt held by blacks. In the 1990s, black and white students, on average, owed roughly the same shortly after graduation. As of 2012, blacks owed nearly twice as much as whites, on average, four years after graduating from college, according to research by Columbia University economist Judith Scott-Clayton. She attributes the change partly to increasing black enrollment in for-profit graduate schools. ...

By 2010, with the U.S. labor market strengthening, the number of Americans seeking higher education began falling sharply, and news reports began appearing about a shortage of high-paying jobs in law. Law-school enrollment, after peaking in 2010, fell about 30% through 2015 to the lowest level since the 1970s, according to the website Law School Transparency.

Law schools, competing for fewer applicants, lowered admissions standards to fill their classes, according to research by Aaron Taylor, head of the AccessLex Center for Legal Education, a nonprofit research group. Admission rates across all law schools rose to a collective 51% in 2013, from 36% in 2010.

Mr. Lively acknowledges a big mistake. To lure prospective students, Arizona Summit made certain bar-preparation courses optional, allowing students to take courses catering to their interests. Many opted out of the bar-prep courses and were unprepared at test time. ... 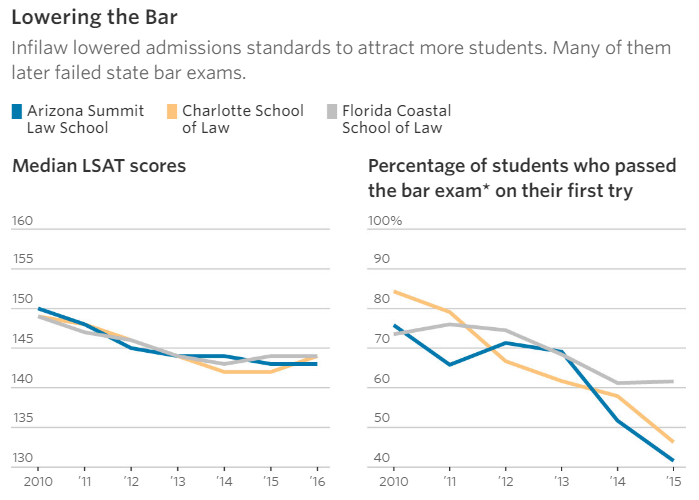 InfiLaw is in talks with nonprofit schools to take over or go into partnership with the Phoenix and Jacksonville schools, says Mr. Lively.

I'm glad Data showed up to crow about the wage premium again. Guess what, friend? WSJ reported today that the House GOP is planning on cutting graduate school federal student lending AND repealing not only PSLF, but unspecified income-based repayment plan(s) for private sector workers, too. Have fun with your conscience while you hawk the mythic law school premium to kids about to attend Cooley on $250k in private, nondischargeable loans. Real simple math for my simple friend: law school debt averages around $150k now. That's a $1,750 after-tax monthly payment. And now that the party in power is going after IBR plans, it is a $1,750 payment. Median starting salary is, what $64k? (discounting the ~9% of law school grads with $0.00 salaries, mind you). That's about $47k after taxes (inc. a reasonable state tax rate). $47k / 12 = $3916 takehome per month. So law school loans alone - forget undergrad - will eat 45% of takehome. Sell that.

I have shared it several times, but here it is again.

How to Help Students from Disadvantaged Backgrounds Succeed in Law School
1 Texas A & M Law Review 83 (2013).

As everyone knows its "Stephen Diamond"! And please share with us your plan to diversify the bar, Scott.

Graduates on non-ABA approved law schools show up in Census data. They just don't show up in After the JD.

So the relevant question is *when* these law schools started gradating students, which is far back enough that at least some of them should show up in the data.

There probably are many successful black and hispanic graduates of these institutions, and many who successfully repay their student loans.

But don't pretend that there aren't successes and benefits.

1) Access Lex is the former AccessGroup, which itself is the former Law Access. In other words, it is the most recent reincarnation of a private student lender operated by the ABA-accredited law schools as a membership corporation.

2) Florida Coastal was accredited in 2002, Arizona Summit in 2010, and Charlotte in 2011. In other words, their graduates won't really appear in certain historic observations of post-graduate activities.

You were going to help at-risk students by letting them opt out of courses basic to their success at proving even minimum competence?