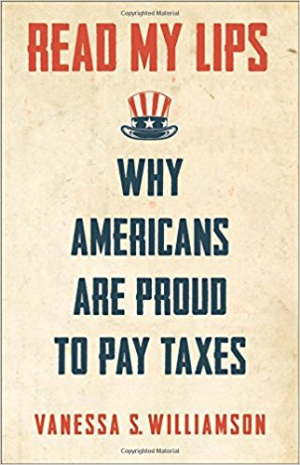 Conventional wisdom holds that Americans hate taxes. But the conventional wisdom is wrong. Bringing together national survey data with in-depth interviews, Read My Lips presents a surprising picture of tax attitudes in the United States. Vanessa Williamson demonstrates that Americans view taxpaying as a civic responsibility and a moral obligation. But they worry that others are shirking their duties, in part because the experience of taxpaying misleads Americans about who pays taxes and how much. Perceived "loopholes" convince many income tax filers that a flat tax might actually raise taxes on the rich, and the relative invisibility of the sales and payroll taxes encourages many to underestimate the sizable tax contributions made by poor and working people.

Americans see being a taxpayer as a role worthy of pride and respect, a sign that one is a contributing member of the community and the nation. For this reason, the belief that many Americans are not paying their share is deeply corrosive to the social fabric. The widespread misperception that immigrants, the poor, and working-class families pay little or no taxes substantially reduces public support for progressive spending programs and undercuts the political standing of low-income people. At the same time, the belief that the wealthy pay less than their share diminishes confidence that the political process represents most people.

Upending the idea of Americans as knee-jerk opponents of taxes, Read My Lips examines American taxpaying as an act of political faith. Ironically, the depth of the American civic commitment to taxpaying makes the failures of the tax system, perceived and real, especially potent frustrations.

A paper on pride in paying taxes at a series sponsored by a law firm that helps people avoid paying them. Very American!