Why Are LSAT-Takers Trending Up Following 5-Year Plunge?

A continuing surge in the number of people taking the Law School Admission Test this year provides another glimmer of hope to law schools that a drought in the applicant pool might be ending.

LSAT numbers have seen modest single-digit gains in the last two testing years, following a five-year decline in which the number of LSAT test-takers dropped by nearly 41 percent. 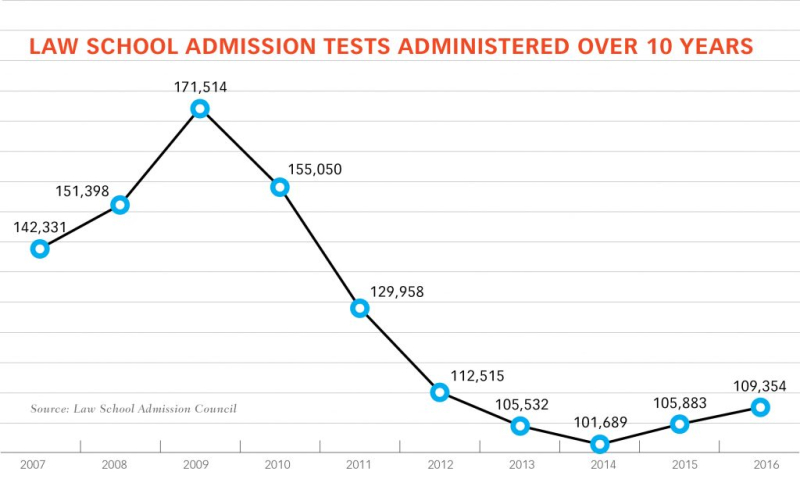 The trend upward is seen as welcome news for law schools — and the profession — since a bigger pool gives schools better odds for admitting more qualified applicants.

In September, 37,100 people took the LSAT, a 10.7 percent increase over September 2016. And in June, 27,600 people took the LSAT, a 19.8 jump compared with June 2016. The number of people registering for the December LSAT is also up nearly 20 percent compared with last year, said Kellye Testy, president and CEO of the Law School Admission Council Inc., which develops the LSAT.

Law school enrollment has followed the same path as the LSAT numbers, with steady declines for years that have recently stabilized and seen a minor uptick, noted Paul Caron, dean of Pepperdine University School of Law in California and author of the TaxProf Blog. And with the increase comes more selectivity from law schools.

“If the total numbers go up, there will be more of those higher-performing students in the applicant pool, so that’s what law schools are hoping to reach,” Caron said. “I would suspect a smaller increase in enrollments than there are in test-takers. Law schools will return to being more selective.”

June was the first administration of the test since the admission council lifted a cap on the number of times someone can take the LSAT. Previously, test-takers couldn’t sit for the test more than three times during a two-year period. Now it’s unlimited.

Both Caron and Lars Smith, interim dean of the University of Louisville Louis D. Brandeis School of Law, said that they and other law deans have wondered if this year’s increasing LSAT numbers reflect more people re-taking the LSAT, rather than first-time test-takers. ... Testy said that the increases are roughly equal between new test-takers and repeaters.

It also remains to be seen if LSAT numbers will ever climb to past levels again, given that more law schools are accepting the Graduate Record Examinations as an alternative to the LSAT. ... “I think there’s a bit of renewed spirit in the United States of young people wanting to work for justice, and law school providing that pathway,” [Testy] said. ... Some people have called it a Trump bump. ...

Caron has one more guess for the increases in LSAT test-takers.

“Those five years of declines — I think that was exacerbated by the very negative press that law schools were getting from The New York Times on down. They were doing negative story after negative story on law schools,” Caron said. “Those stories have petered out now.”

In other words, there are still nearly 1/3 fewer LSAT test-takers than when all of those 'law school crisis' articles first hit. And note how much the graph of test-takers resembles the graph for the NALP median starting salaries for law school grads...

Obligatory reminder that this administration and Congress wants to get rid of PSLF, GradPLUS, and extend IBR payments on grad school loans to 30 years at 12.5%, none of which will make the lives of law school graduates any easier.