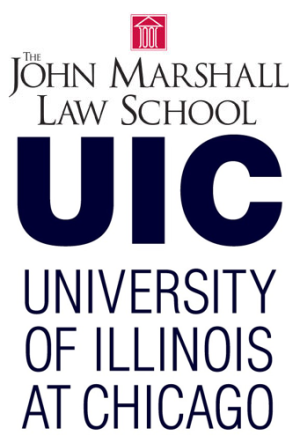 The University of Illinois at Chicago is in "preliminary discussions" with John Marshall Law School about the law school becoming a part of the university, which would create the only public law school in the city.

UIC Chancellor Michael Amiridis and Provost and Vice Chancellor for Academic Affairs Susan Poser disclosed the discussions in a campus-wide memo today, noting that the institutions' missions are complementary and would allow for opportunities that "bridge the discipline of law with the disciplinary strengths of UIC."

John Marshall Law School Dean Darby Dickerson sent a similar memo to her school's community, saying “these opportunities come with many questions—a number of which we simply don't have answers to yet—but this will be a transparent process, and I will provide further updates as they emerge.” She said she would host a meeting for students on Nov. 27. ...

[T]he law school, founded in 1899, would become a new school at the west side UIC, which operates 15 schools and colleges, and its law students and faculty would become part of UIC. There would be the possibility of job cuts as the schools seek out “efficiencies,” but the question-and-answer document said “no decisions have been made about changes in the workforce.” ...

Combining the schools would give students new opportunities to take classes at both schools, give John Marshall students access to more recreational and athletic facilities, and potentially create new dual-degree programs in health sciences, engineering, technology and other fields. In addition, UIC would offer an accelerated undergraduate and law degree program allowing students to achieve both in six year, instead of seven.

The State of Illinois is careening toward bankruptcy and the folks who run UIC can only think about the prestige of adding on an existing third tier law school?

But UIC designates itself as a "top research university." Unless they also have a law school, they'll be stuck at the bottom of that particular barrel along with loser colleges like MIT and Princeton.