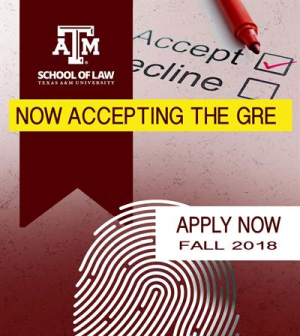 Following up on my previous posts (links below): Texas A&M is the ninth law school to accept the GRE as an alternative to the LSAT, joining (in chronological order) Arizona, Harvard, Northwestern, Georgetown, Hawaii, Washington University, Columbia, and St. John's:

“Our decision to accept the GRE will make it easier and cheaper for Texans to gain access to law school,” said Interim Dean Thomas W. Mitchell. “It will also make law school more attractive to highly qualified students who have diverse educational backgrounds and interests, including students from fields such as engineering and science.”

To comply with American Bar Association standards, the Law School participated in a validity study involving current and past Texas A&M students. The study found that the GRE is a strong predictor of success in the first year at Texas A&M.