List Of 140 Colleges With Endowments Greater Than $100,000 Per Student That Would Be Subject To GOP's Proposed 1.4% Tax On Investment Income

Chronicle of Higher Education, If House Republicans Get Their Way, These Colleges Would See Their Endowments Taxed:

In a sweeping plan to rework the tax code unveiled on Thursday, Republicans in the House of Representatives floated a new strategy for raising revenue: Tax college endowments.

Some college endowments, that is.

Deep within the plan — look here, on Page 75 — is the language that spells out which institutions would be affected. The bottom line: Only the most-affluent colleges need worry. Colleges would be subject to the tax, set at 1.4 percent of net investment income, only if their endowment assets total at least $100,000 per student.

How many colleges does that leave? About 140, according to a Chronicle analysis. ... The following chart shows the 200 private institutions with enrollments of 500 or more, ranked by the value of their endowment per student. Values marked in yellow indicate that they would make their institutional endowments subject to taxation. 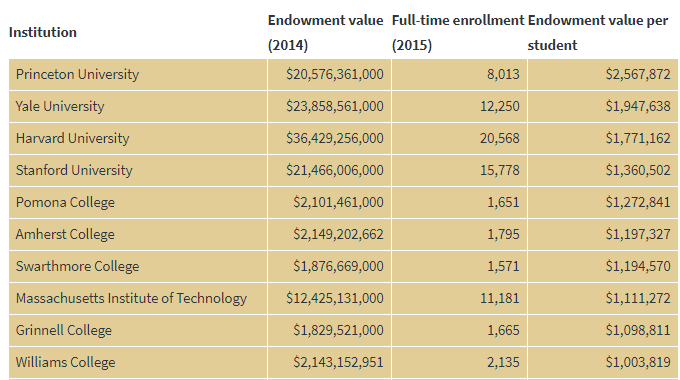 Pay-back? Unlikely, but for certain, if taxes ARE imposed, Democrats will later raise them, given the chance.
To be fair, universities are not now "educational" institutions, they are lucrative, tax-free corporations run by lawyers, with a highly paid cadre of administrators, and then, everyone else, including the students, are secondary.
Universities are far to the left of Bernie, having never experienced what it is like to live in a Communist society.
Tenure is being slaughtered, so academic independence is dying (see U of Arkansas proposals).
Taxing universities is only fair, given their extravagances.

Next, let's talk about their property tax exemption.

That's one person, not three great institutions which serve tens of thousands of students and produce research that benefits everyone.

The Koch Brothers each have $42 billion and combined are richer than Gates. And they made a lot of that money polluting and externalizing in the oil and plastics industries.

If you're really worried about "Hoarding" then you would start with these billionaires, not rob poor college students to enrich billionaires, the way the Republicans are trying to do.

@tax fair: I agree with several of your concerns, but would like to offer some counterpoints:

1. If colleges and universities want public subsidies (and special tax status is an enormous subsidy), they should keep their focus on teaching instead of political activism. We can argue about the comparative emphasis between these two activities, but the fact that this is even an issue gives the critics a valid argument. It is simply not moral to tax a person to fund another who not just disagrees with them, but argues that their opinion is beyond the pale of civil discourse. Even if you choose to view it as "narrow partisanship", it is not irrational.

2. Regarding the comparison between universities and wealthy individuals: university endowments are effectively perpetual and frequently have been built up over decades of capital accumulation, while the wealthiest individuals are typically either first- or second-generation tycoons. Under current law the former will never be taxed, while the latter will eventually be distributed through inheritance taxation (understanding it is proposed to reduce this, which I do not defend), charitable giving (often to universities to avoid taxation), and dissolution of future heirs. A healthy society cannot permit multi-generational accretion of wealth (and the power that comes with it); isn't this the whole point behind the objection to income inequality? Why is income inequality not a problem when universities are the perpetrators?

3. I agree that education is important for "good jobs". I do not agree that our current universities insist that their students get an education as a requirement for graduation. I work with a large number of prior military, many of whom do not have college degrees. The advantages they bring in basic workplace ethics, like showing up on time and not complaining when they don't get the assignment they want, far outweigh their lack of "general education". Their ability to accomplish core business goals is comparable to their "educated" counterparts. And frankly their understanding of the human condition is a lot more visceral than they would get in an Anything Studies seminar.

4. "Education is the enemy of the Party, and so better Red than Expert." - sadly there is more truth to this than I would wish. I think it is perfectly rational to be anti-intellectual, given how abysmally our current "intellectuals" behave. Unfortunately this has migrated from anti-intellectual to anti-intellect, where many people (on both sides of the political aisle) reject the basic tenets of the scientific method and reason. This is utterly deplorable, and I have no idea how to fix it. But I do know that name-calling is a step in the wrong direction.

Quote: "Rich" universities are not that rich.

Let's see, Harvard has over $36 billion, Yale almost $24 billion, and unfortunate Princeton is an impoverished third at a mere $20 billion. To get numbers like that, it's obvious there's been a heck of a lot of hoarding—and no tax paying—going on for a long time. Their endowment per student looks like it's about $2 million.

Personally, I'm disappointed this tax isn't heavily progressive and is set at a mere 1.4%. The top five or so should be paying at least 10%. Heck, I pay almost that in sales tax when I buy groceries.

The GOP may be starting to get it. We are at war with the left. Taxation, regulation, harassment against leftist institutions/organizations should be obvious. Start with rescinding ability of Federal workers to unionize, taxes on the media, etc. The left has always been populated by better tacticians and true believers. It is for no reason that the GOP is known as the stupid party. Perhaps they are getting a modicum of smarts.

There is a logic to this proposal, but some people will likely see it as payback to liberal institutions

Universities use their endowments to pay for scholarships for students, to provide academic support, and to fund research that helps everyone. While republicans at the federal level raid private university endowments to pay for tax cuts for billionaires, Republicans at the state and local level slash funding for public universities and K-12 education.

"Rich" universities are not that rich. There are *individual people* on the Forbes 400 list who personally own more than universities that serve hundreds of thousands of students.

This is the narrow partisanship that you have to expect from the Republicans.

Education may be absolutely vital and essential to creating good jobs for Americans here in the United States. But people who are more highly educated are less likely to vote Republican. (Perhaps because they realize Climate Change is not a "Chinese Hoax").

Education is the enemy of the Party, and so better Red than Expert.

Yes, Anon, unless it is actually a tax decrease.

Eliminating this massive tax expenditure (i.e., not taxing universities on their endowment income) is low hanging fruit and would generate revenue from precisely where more should come from: progressive-dominated institutions that hord money. Bravo!

Is it not right that these college foundations will actually experience a tax decrease to the extent they historically made grants insufficient to qualify for the 1% tax? In any case doesn't this single rate proposal operate to remove what was in essence a penalty against favoring unlimited accumulation over current grant-making?