'It's Okay To Be White' Signs Posted At Harvard Law School, Denounced By Dean 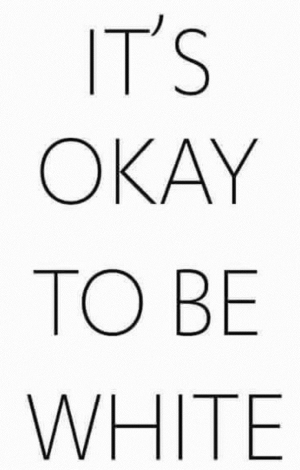 Harvard Crimson, 'Okay To Be White' Stickers Crop Up at Harvard, Around Country:

More than a dozen handmade stickers reading “It’s okay to be white” surfaced around Harvard Square Wednesday, prompting Cambridge officials to remove them and a Harvard Law School Dean to denounce the signs as “provocations intended to divide us.”

The stickers appeared to be part of a campaign started on the forum website 4chan, which called upon followers to put up posters with the message in their area on Halloween night. The author of the original post on the site wrote that they hoped the “credibility of far left campuses and media gets nuked” as a result of the incident, adding that they could help achieve a “massive victory for the right in the culture war.”

Similar stickers were spotted in a handful of places around the country Wednesday morning.

“It seems likely that these anonymous postings, made in the middle of the night, were provocations intended to divide us from one another,” Law School Dean of Students Marcia L. Sells wrote in an email sent to Law students Wednesday after the stickers were spotted at Wasserstein and Hastings Halls.

“HLS will not let that happen here. We live, work, teach, and learn together in a community that is stronger, better, and deeper because of our diversity and because we encourage open, respectful, and constructive discourse,” Sells wrote. ... Sells confirmed in her email to students Wednesday afternoon that the stickers at the Law School had already been removed.

As an underrepresented minority person who has faced overt prejudice, I've simply never understood the apparently "progressive" concept of exacting pre-judgment upon white people. You simply can't win that way.

The dirt poor white kid in Appalachia, for example, does not deserve any collective preconceived opinion whatsoever about anything having to do with privilege without regard to her specific circumstances. Yet, unbeknownst to her, and despite her living conditions, the progressive elite consciousness blindly proclaims that she bears the sins and reaps the spoils of whites who who’ve historically dominated this country (though her actual genealogical circumstances are unknown, she could very well be the descendant of historically oppressed peoples herself) yet she is made to believe she should proceed with some esoteric contrition because of the color of her skin.

How do we guilt people into racial utopia? It is untenable. From my perspective, it is absolutely "ok to be white." It is ok to "be" whatever that looks like, and progressivism has itself to blame that some folks feel a need to proclaim it is “ok to be white.”

Contemporary U.S. Progressivism ranks squarely among the most divisive ideologies I can find in the history books. It is really sad, there is a better way.

Trump gets coverage, Mr. IgnoreThem, because he's the President of the United States. Sorry that bothers you.

The more people overreact to things like this, the more popular they will become

If these are "provocations intended to divide us," what is the purpose of "Black Lives Matter" and similar signage" I don't see any difference.

The really bad part is "Its OK to be white" is not even white supremecist. When the leftists objected to it, when "Black lives Matter"is supposed to be OK, they just reveal themselves to be totally insane.. Real white supremecism would have said "white people are better".

Here's a wild and crazy idea. When white supremacists bait you to try to get free press coverage, don't cover them. Same goes for Trump. The press can't help themselves, giving free coverage to these clowns.

Make them pay for advertising if they want coverage.

Jon: Of course they were designed to be divisive, and of course the Dean was right to denounce them.

No, Jon, they were designed to reveal the divisiveness of progressives and they did a fantastic job.

Just curious, but did the Dean denounce these guys when they visited last year?

"Debater At Harvard Says White People Should Kill Themselves Because Of Their White Privilege"
http://www.dailywire.com/news/4180/debater-harvard-says-white-people-should-kill-chase-stephens?utm_source=newsletter&utm_medium=email&utm_content=031716-news-title&utm_campaign=dwbrand

Maybe so-called progressives should consider that certain inflammatory reactions cause counter-reactions. That's the logical way of looking at things, anyway...

What the hell? IT IS OKAY TO BE WHITE.

As Zed said in today's Day By Day, "It's not OK to be white. It's friggin' awesome!"

She claims not submitting to collective guilt "divides." To her, lumping individuals into clans and proclaiming either the victimhood or guilt of everyone, is the recipe for a peaceful, benevolent society. Higher Education has left the planet.

Yet again university officials reveal their lack of humor. This is getting depressing. Since when is "It's OK to be white" divisive? We've been told repeated that "Black lives matter" isn't. This is merely that same remark flipped. A second grader can understand that.

This nastiness is not good for your health either. I saw that about 1984 in what must have been one of the first outbreaks of political correctness on a college campus. I was a graduate student at the University of Washington. About lunch time I was hosting a booth for a pro-life student group. A middle-aged woman came up, screaming that organizations like mine did not belong on a university campus. Even more revealing, the target of her wrath was a flyer offering "Alternatives to Abortion." "Don't feminists want women to have alternatives?," I thought. After saying something about their lawyer talking to our lawyer, she stalked off. For feminists, talking about lawyers seems to substitute for actual communication.

A few minutes later, a man who claimed to be the official in charge of all student organizations came up and displayed a similarly threatening attitude. I refused to get rattled or be intimidated, so he left. He'd threatened to shut down our organization, so after I closed the booth, I called our director and told her about the incident. That was Wednesday. On Friday, she checked our organizational mailbox and discovered that we'd already been kicked out without being given any chance to defend ourselves. Yeah, much like today's campuses.

Their claim was that we'd illegally used that flyer with the Associated Students logo on it. That claim was quickly tossed out. The flyer had been printed for a campus debate and, since the ASUW paid for the debate, it insisted on having its logo on it. Our campus advisor had OKed us to use the left-over flyers, so we were grudgingly reinstated. That incident illustrates that must of the nastiness of today's left is rooted in its decades old defense of legalized abortion. Defend the indefensible, and you're forced into all sorts of madness.

Now to get to the point of all this. About a year later I read that the student activity coordinator who kicked us out had died of a massive coronary. He could have been over forty-five at the time but I thought back and realized, "Yes, he did display the sort of bile and anger that kills you early in life." In a decade or so, we may find these university officials dropping like flies from similarly unexpected heart attacks. They are killing themselves with anger and hate while chattering incoherently about tolerance. That screws your head up and your body soon pays a heavy price for that.

Of course they were designed to be divisive, and of course the Dean was right to denounce them.

It’s brilliant. You simply can’t oppose the message without appearing as a complete racist.

These idiot “educators” are trying to claim they are against division but they are literally saying it’s not OK to be white.

Progressivism is a mental illness.

So I guess it's not really okay to be white?