Gillman & Chemerinsky: Professors Are Losing Their Freedom of Expression 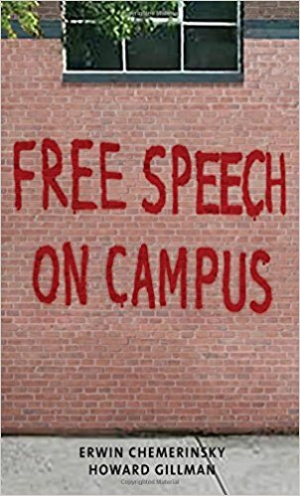 With so much attention focused on whether controversial speakers such as Milo Yiannapoulos or Richard Spencer should be allowed to appear on campus, an even more basic issue has been obscured: universities punishing faculty who, outside of professional settings, express views that are considered controversial or even offensive.

There are many recent examples of this. A year ago, a University of Oregon law professor was suspended for wearing blackface at a Halloween party held at her house. Twenty-three law school faculty members wrote a letter urging the professor to resign. A campus investigation found that by wearing this costume at a party in her home she had engaged in “discriminatory harassment.” [More here]. ...

In responding to those who would silence or censor speakers, many people, especially on the right, argue that, at universities, all ideas should be expressible, and if someone doesn’t like particular ideas, the response should be to engage and rebut the speakers rather than harass them or shout them down. These same sentiments should apply when faculty members express controversial opinions. ...

Of course, campuses must evaluate the quality of a professor’s teaching or scholarship, which inherently involves assessing their speech. But universities must not use a professor’s statements in other settings as a basis for “excommunicating” an otherwise qualified professor.

Campus leaders who are declaring their commitment to protect controversial speakers should also make it clear that they will not take unilateral actions against faculty — or students — for the views they express as long as they act appropriately within the campus’s professional settings.

We think a consistent rule is better: On campuses, no one should be censored or punished merely because of the ideas they express, and we should all stand against threats, harassment and violence.

It's happening in Arkansas:
http://reason.com/archives/2017/11/22/arkansas-universities-want-to-be-able-to?utm_medium=email

Who are the people on ther right who encourage harassment of left-wing speakers? Where?

Seems to me the quickest way to end campus censorship would simply be for Congress to implement a massive cut to, or even complete defunding of, federal aid to higher education. Nothing focuses a SJW's mind so wonderfully as the impending derailment of his/her gravy train.

Those who create monsters shall not complain when their creations turn on them.

For the record, Erwin Chemerinsky is the one who once called for George Bush and Dick Cheney to be tried as "war criminals". I heard him say this with my own ears at a Law and Society conference at the University of Wisconsin Madison in Sept. 2008.