2017 International Tax Competitiveness Ranking: U.S. Is 6th From The Bottom

The International Tax Competitiveness Index (ITCI) seeks to measure the extent to which a country’s tax system adheres to two important aspects of tax policy: competitiveness and neutrality. ... To measure whether a country’s tax system is neutral and competitive, the ITCI looks at more than 40 tax policy variables. These variables measure not only the level of taxes, but also how taxes are structured. The Index looks at a country’s corporate taxes, individual income taxes, consumption taxes, property taxes, and the treatment of profits earned overseas. The ITCI gives a comprehensive overview of how developed countries’ tax codes compare, explains why certain tax codes stand out as good or bad models for reform, and provides important insight into how to think about tax policy. 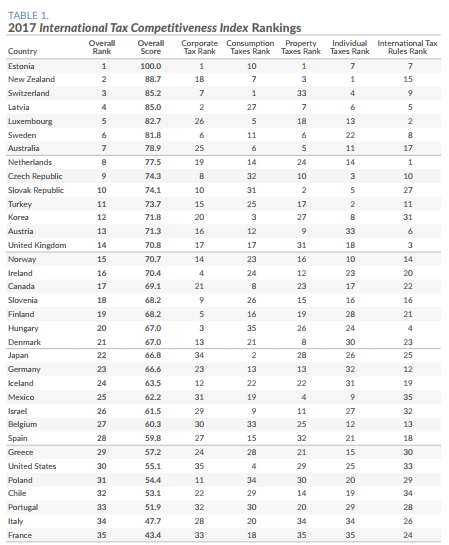 The United States, for example, has not reduced its federal corporate income tax rate from 35 percent since the early 1990s. As a result, its combined federal, state, and local corporate tax rate of about 39 percent is significantly higher than the average rate of 25 percent among OECD nations. In addition, as most OECD nations have moved to a territorial tax system, the United States has continued to tax the worldwide profits of its domestic corporations.

...and it's not lower because of the consumption tax score.

New York and California on the other hand, would be considerably lower in the rankings.