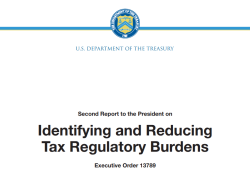 This Second Report recommends actions to eliminate, and in other cases mitigate, consistent with law, the burdens imposed on taxpayers by eight regulations that the Department of the Treasury (Treasury) has identified for review under Executive Order 13789. As stated in the order, it is the policy of the President that tax regulations provide clarity and useful guidance. Recent regulations, however, have increased tax burdens and impeded economic growth. The order therefore calls for immediate action to reduce tax regulatory burdens and provide useful and simplified tax guidance.

The order directed the Secretary of the Treasury to identify significant tax regulations issued on or after January 1, 2016, that (i) impose an undue financial burden on U.S. taxpayers, (ii) add undue complexity to the Federal tax laws, or (iii) exceed the statutory authority of the Internal Revenue Service (IRS). In an interim Report to the President dated June 22, 2017 (the “June 22 Report”), Treasury identified eight such regulations. Executive Order 13789 further directs the Secretary to submit to the President a report recommending “specific actions to mitigate the burden imposed by regulations identified in the interim report.”

This Second Report sets forth the Secretary’s recommendations. Treasury expects to issue additional reports on reducing tax regulatory burdens, including, as directed in the order, the status of Treasury’s actions recommended in this Second Report. ...

Obviously the IRS is planning to implement 4 new regulations.

Who said elections have consequences?

return of creative tax planning but then regulations are not the code...............so now we only have the code to parse