The Problem Of Taxpayer Communications And The Return Receipt Requirement 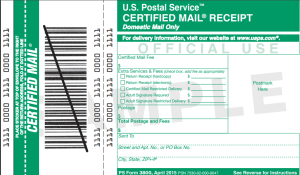 The basic idea was to see if a simple letter mailed to taxpayers who had demonstrated some identifiable error in their 2014 EITC claims would result in them making fewer errors in their 2015 EITC claims. Not only that, but the study compared that group to a control group of similar taxpayers who made similar errors but who were not sent a letter explaining where they went wrong.

Certainly, my intuition as a teacher is that when you give feedback on what students do wrong, they tend to do better. The study supports that intuition’s application to taxpayers: tell them what they were doing wrong and they will do better overall and will certainly do better than those who get no such feedback.

What struck me as particularly interesting and worth further comment was the feature of just how the Taxpayer Advocate Service sent the letter to the taxpayers. Nina gives this description:

The letter was sent out under my signature and was mailed during the first few weeks of January, before the start of the 2016 filing season. In fact, to enhance the saliency of the communication, TAS sent the letter in envelopes printed with “Important Tax Information Inside,” in red, so taxpayers expecting Forms W-2 might actually open the envelope and read the letter.

This description is worthy of three notes. First, notice Nina’s concern that taxpayers “actually open the envelope.” Second, notice how she implies that by putting the “Important Tax Information Inside” lettering on the envelope taxpayers “expecting Forms W-2” may be fooled into thinking that this communication contained the W-2’s. Finally, notice that she does not say whether the envelopes were mailed “return receipt requested” or whether they were marked as having come from the Treasury Department the IRS, the TAS, or left unmarked.

As to the first note, this is a perennial problem the Service faces in all aspects of tax administration: how to get taxpayers to “actually open the envelope.” Table 16 in the IRS Data Books used to tell readers how much money came just from sending out bills and asking for payment. For example, table 16 in the 2000 Data Book reports that for FY2000 of the total $30 billion collected that year from delinquent accounts, about $23 billion was collected just through taxpayers getting notices and sending in their payments and $7 billion was collected through more stringent enforcement actions such as liens and levies.

As to the second and third notes, no one likes getting mail from the IRS. Just seeing “IRS” in the sender’s corner make my heart race and brow furrow, even when it turned out to be just my refund check or a letter explaining how I had been subject to a data breach. I am sure all of us who have represented taxpayers have stories of our clients coming to us and---if we are lucky---handing us still unopened envelopes. If we were not lucky they would have thrown the unopened envelopes away!

Congress makes it all too easy for the Service to fail to communicate with taxpayers. First, while Congress has studded tax administration statutes with notice requirements, Congress only requires that the Service mail important notices to the taxpayer’s last known address; there is no requirement that taxpayers actually receive or open the notices. Given how difficult it would be for the Service to ensure receipt, however, this “proper mailing” requirement makes sense. Further, it is consistent with general ideas of what constitutes proper notice in civil litigation. See, e.g., Federal Rule of Civil Procedure 5(b)(2)(C).

But Congress also enables communication failure---where taxpayers do not “actually open the envelope” — by requiring the Service to mail almost all important notices “return receipt requested.” This gives taxpayers the false sense that if they simply don’t sign for the notice, it won’t count against them.

Still, it might be well worth the resources to repeat that experiment in a study as nicely designed and executed as this latest one from the TAS.