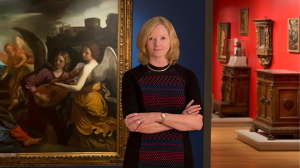 Loyola University Chicago School of Law is pleased to announce the appointment of Professor Anne-Marie Rhodes as the John J. Waldron Professor of Law.  Rhodes has been a member of Loyola’s full-time law faculty since 1980.  She teaches courses in estate-and-gift tax, income tax, estate planning, trusts and estates, art law, and comparative law, and is a frequent presenter and is widely published in these areas. Her book Fundamentals of Federal Estate, Gift, and Generation-Skipping Taxes (West Academic) was published this year.  Her casebook Art Law & Transactions (Carolina Academic Press) was published in 2011.

Rhodes is an Academic Fellow of the American College of Trust and Estate Counsel (ACTEC), and currently serves on the ACTEC Board of Regents. She has served as co-chair of its Legal Education Committee and on the Board of Trustees of the ACTEC Foundation. At Loyola, she served on the Advisory Board of the Martin D'Arcy Gallery, on the executive team of the Loyola Family Business Center at the Quinlan School of Business, and as a faculty mentor to the University's Center for Faculty Development. She is Of Counsel to the Chicago office of Reed Smith, LLP.

Rhodes taught as a visiting professor at the University of Tennessee School of Law and at the Universidad Alberto Hurtado in Santiago, Chile, in the school’s tax-certificate program. She has presented on tax and estate planning, as well as art law and comparative law, at schools and organizations around the country and the world, including Notre Dame Tax and Estate Planning Institute; the College Arts Association; Harvard Law School; Second Symposium on Legal Aspects of International Art Trade in Geneva, Switzerland; ACTEC symposium at UCLA on Succession Law in the 21st Century; AALS; and the Universita Milano-Bicocca.  She has provided commentary in Washington, D.C. to the IRS. Rhodes earned her BA from Albertus Magnus College, and her JD from Harvard Law School.

John J. Waldron was a friend and supporter of the School of Law and a revered attorney and former partner at the Chicago law firm Schiff Hardin LLP, where Rhodes practiced as an associate for three years following law school. “John Waldron was a legend in the Chicago bar and one of my first mentors,” says Anne-Marie Rhodes. “To have my name linked to his is a great personal and professional honor.”

John Blum, a professor of law in Loyola’s nationally ranked Beazley Institute for Health Law and Policy, also is a distinguished holder of a professorship honoring the late John J. Waldron.