IMF: Higher Taxes On The Rich Will Reduce Inequality Without Hurting Economic Growth

Rising inequality and slow economic growth in many countries have focused attention on policies to support inclusive growth. While some inequality is inevitable in a market-based economic system, excessive inequality can erode social cohesion, lead to political polarization, and ultimately lower economic growth. This Fiscal Monitor discusses how fiscal policies can help achieve redistributive objectives. It focuses on three salient policy debates: tax rates at the top of the income distribution, the introduction of a universal basic income, and the role of public spending on education and health. 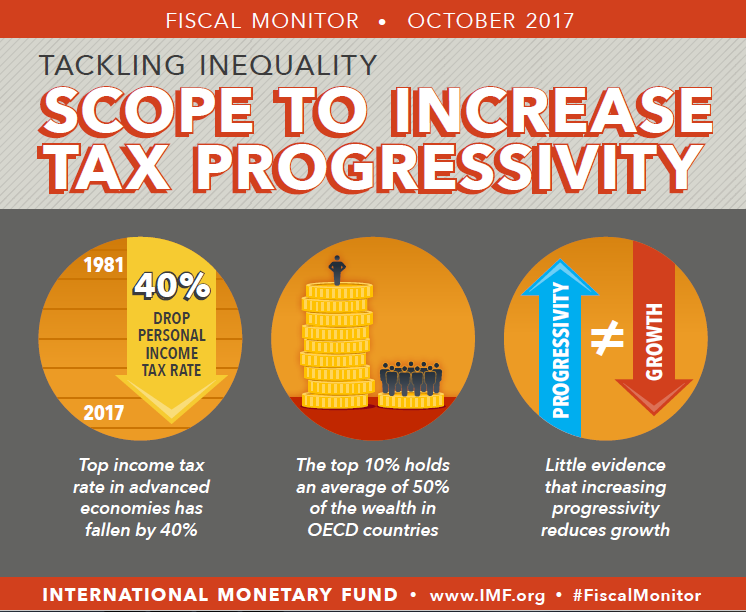 The International Monetary Fund delivered a blunt warning to international policy makers ahead of the fund’s annual meeting this week: Governments risk undermining global economic growth by cutting taxes on the wealthy.

The message, while aimed broadly at all developed nations, carries particular resonance in the United States as the Trump administration and Republican lawmakers push a tax plan that critics say will exacerbate income inequality by reducing taxes for the richest Americans. ...

“Those kinds of regressive taxes lead to the creation over time of increasingly more disparate wealth and income inequality,” said Joseph E. Stiglitz, a professor at Columbia University. “So rather than reducing that kind of regressivity, his proposals, as far as one can say, are going to make things worse.”

The Guardian, IMF: Higher Taxes for Rich Will Cut Inequality Without Hitting Growth

I'm having a hard time squaring this latest research with some prior OECD research:

Which concluded in part:

I'm also skeptical that increasing taxes on the wealthy will have no adverse effects on economic growth. In looking at the European members of the OECD, their weighted-average government spending as a % of GDP is currently 54%, with growth rates lagging the United States, which itself hasn't shown strong economic growth since at least 2005.

But I'd love Europe to be a testing ground for this sort of Piketty-inpired scheme. If 54% of GDP isn't enough to alleviate inequality, why no grow that to 75% of GDP? Europe already takes its private sector for granted, so why not shrink it some more to meet government objectives?

The focus on "inequality" is a sham and should be shifted to standard of living for a nations poorest people. E.g., there likely is less inequality in Venezuela because a significant amount of the people are equally as poor

Come on MM, let's go ahead and take it all.

I hope governments do take it all, in Europa. The U.S. is already MORE progressive tax-wise than any of the Western European and Scandanavian utopian states. Now how does that work? Failing by and large to meet their NATO spending obligations, for one thing. And that's just for starters...